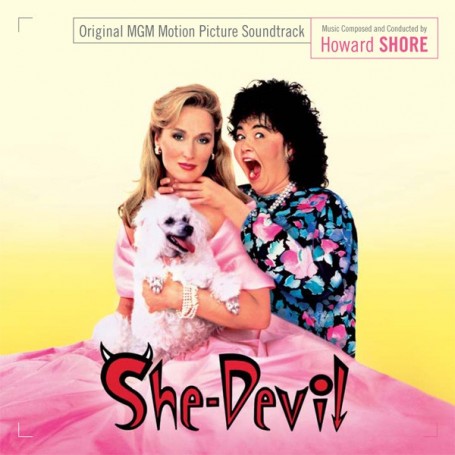 Music Box Records presents the original soundtrack from She-Devil by Howard Shore. Based on the novel The Life and Loves of a She-Devil by British author Fay Weldon, Susan Seidelman’s adaptation of the book tells the story of frumpy housewife Ruth (Roseanne Barr) who thinks she got it made with her handsome accountant husband, Bob (Ed Begley Jr.). When Bob meets bestselling romance novelist Mary Fisher (Meryl Streep), the couple quickly separates but the trauma unleashes great powers within Ruth. Once bored and lonesome, Ruth reinvents herself, gets a job, then starts her own enterprise in order to carry out an elaborate revenge against Bob…

Written by Howard Shore (composer of The Lord of the Rings and most of David Cronenberg’s films), the music for She-Devil is a brilliantly energetic score balancing between deliberately overblown romance and devilishly clever cues underscoring Ruth’s sudden urge for creative destruction. The key idea of the score is transformation as we can hear two sides of the most important musical ideas – one for Mary and one for Ruth. There’s also a rich tapestry of musical allusions, ranging from the evergreen song Strangers in the Night (the theme for Bob and Mary) to colorful references from Russian classical music, including Mussorgsky’s Night on Bald Mountain and The Gnome.

While there was a previous soundtrack release of She-Devil, it was a "songs from and inspired by" type of compilation that featured nothing from Shore’s brilliant contributions to the film. Music Box Records corrects this omission by releasing all 42 minutes of the underscore, transferred from the original 24-track master tapes, with several reprises of the great romance theme, Ruth’s chilling vengeance music and a couple of other surprises for the attentive listener. The 8-page booklet features liner notes by Gergely Hubai discussing the film and the score, plus includes quotes from Howard Shore on how he remembers the project.

"Music Box's album is a sparkling and entertaining score that deserves to be discovered that truly displays the immense talents of Oscar winner Howard Shore in that he can score films that don't just pretain to hobbits, wizards or orcs." (Examiner)

"The energetic score matches the forked-tongue-in-cheek humor of the film with its references a-plenty to pop standards, familiar classics, and other musical allusions. Shore also cheerfully engages in some clever references to Bernard Herrmann (…), one of which captures an almost Elmer Bernstein styled bombast to its heavily arpeggiated structure, that carries on a wonderful musical duel that resolves quite smashingly.  It’s all furious fun." (Randall Larson, Soundtrax)