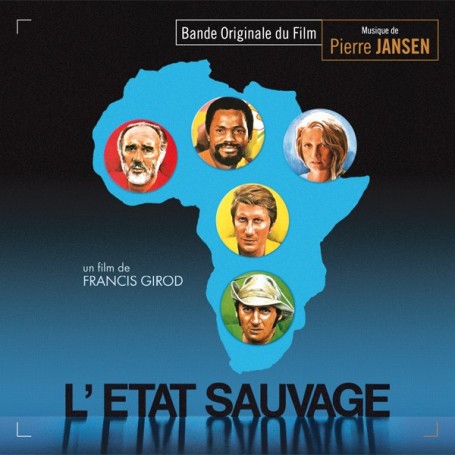 After releasing on CD René la Canne, Le Bon Plaisir and Descente aux Enfers, Music Box Records explores a new chapter in the career of Francis Girod, releasing the two original motion picture soundtracks composed by Pierre Jansen for this director. L’État Sauvage (1978) adapted from the novel of the same name by Georges Conchon (winner of the 1964 Prix Goncourt) deals with the initial period after decolonization of a fictional African state, centring on the tormented and chaotic destinies of five main characters. Le Grand Frère (1983), a revamp set in Africa and Marseille of Sam Ross’s novel Ready for the Tiger (translated as part of the Série Noire collection), allows, through the conduit of a seedy story of revenge, for the head on tackling of a number of social problems, not least among which features the integration of the first generation of French of North African descent.

Pierre Jansen recalls his two exigent collaborations with Francis Girod:
“L’État Sauvage deliberately avoided any musical reference to Africa as it was my intent to avoid at all costs producing an illustrated postcard in sound. To resurrect the harsh savagery of racism – and even of the types of racism denounced in the film to the point where the viewer is led to wonder who it is exactly who is the savage! – I opted for a Westernized, jerkily rhythmic and dissonant score, which can be heard right from the main title, which is particularly jarring.”
“For Le Grand Frère, I let myself be inspired by the general climate of the film and I also wrote in a highly rigorous manner, image by image, out of which came a result approaching a more traditional type of film music. One can distinguish two principal streams running through what I contributed: on the one hand the symphonic tracks intended to enhance the dramatics of the screenplay and the psychology of the protagonists with impressionistic touches in places and on the other hand I created the majority of the source music myself.”

Music Box Records, in collaboration with Gruppo Sugar and EMI Music Publishing, presents both scores for the first time on CD and transferred from the original stereo master tapes. The limited edition of 500 copies comes with an 8-page booklet with French and English commentary by Laurent Perret and an interview with Pierre Jansen.

"The opening title (L’État Sauvage) is a blend of Herrmannian thriller strains with harsher, modernistic harmonies. Jansen’s handling of the orchestra is always engaging and makes for an excellent listening experience… (Le Grand Frère) has a noirish quality and a great sense of drama, often capturing a feel of period television drama scoring as if expanded for the big screen." (Steven A. Kennedy, FSM Online)