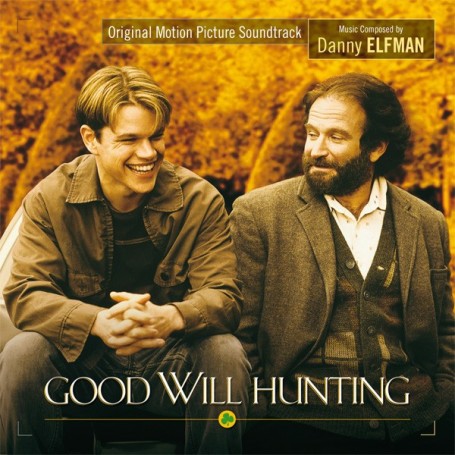 45 minutes of music, including the complete score by Danny Elfman and the songs written by Elliott Smith used in the film.
12-page CD booklet with liner notes by Daniel Schweiger.

Music Box Records presents the complete score for Good Will Hunting (1997) by Danny Elfman. Directed by Gus Van Sant based on a screenplay by Matt Damon and Ben Affleck, the film tells the tale of the troubled title character (Damon) who is a janitor at MIT and is secretly a real mathematical genius. Reluctant to leave his regular life and job behind, Will needs help from psychologist Sean Maguire (Robin Williams) who shows him the way of realizing his full potential without abandoning his roots…The film won two Oscars (one for Williams and one for the writers) while it was nominated for another seven statuettes, including one for composer Danny Elfman and one for songwriter Elliott Smith.

Danny Elfman is of course best known for his Tim Burton movies (ranging from the director’s two Batman films to more recent affairs like Alice in Wonderland), but the composer has numerous other directors with whom he works regularly. Good Will Hunting marked the second collaboration between Elfman and Gus Van Sant (the first one being the director’s bitingly satirical To Die For, 1995); the relationship later extended to other films like Psycho (1998), Milk (2008), Restless (2011) and Promised Land (2012). Their collaboration on Good Will Hunting proved to be the most elusive of the bunch even though it brought Elfman the first Oscar nomination in his career.

The music for Good Will Hunting is a far cry from the usual Gothic sound of the composer who proves himself to be more than capable when it comes to scoring a deeply personal story. The music features acoustic guitar, piano, a smaller ensemble of strings and woodwinds plus a light choral effect in addition to some Irish sounding whistles that address the Boston setting of the story. From the Main Title to the End Titles (previously known as "Weepy Donuts"), Elfman’s music is mingling among minimalistic thematic variations the same way the titular Will Hunting is looking for a purpose in life…

Spicing up the intimate orchestral score are the contributions of indie songwriter Elliott Smith, whose Miss Misery was nominated for an Academy Award in the category of Best Original Song. The song gave major exposure to Smith who unfortunately passed away at the tragically young age of 34 in 2003.

Good Will Hunting has always been one of the great missing links in Elfman’s discography. The original soundtrack clearly favored the songs by Elliott Smith (and other artists) while Elfman’s work was represented with only two tracks. Although Miramax issued a rare Academy promo for members of the organization, that disc only contained selected highlights and Smith’s Oscar-nominated Miss Misery. Music Box Records presents the complete release of the score, including more Elfman music than what the promo contained, plus six compositions performed by Elliott Smith. The landmark release of this Oscar-nominated gem is supplemented with an 12-page booklet featuring expert commentary by Daniel Schweiger.

"This is of course an essential release for fans of the composer and should have a wider appeal, showcasing a very distinctive and undeniably very clever musical approach to the film." (James Southall, MovieWave)

"This is definitely a solid release that has been a long time in coming and really fills one of the holes of Danny Eflman's memorable discography." (Examiner)

"This is an essential score in the development of Elfman’s career, representing his first Oscar nomination and one of his most subdued, yet hauntingly beautiful works. The Music Box release is a must for his fans." (Cary Wong, FSM Online)