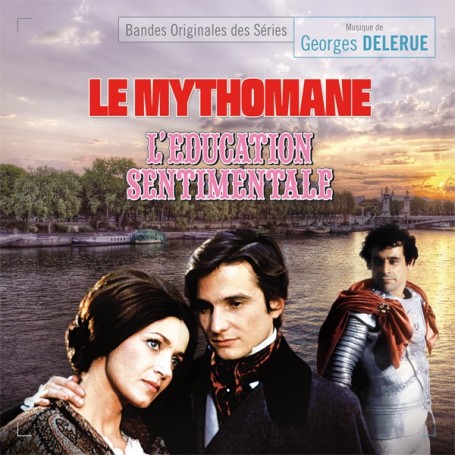 Written by Alphonse Boudard, Le Mythomane had its origins in an episode of the 1979 series Histoires de voyous directed by Michel Wyn. The TV series tells the story of the daily lives of common petty thieves. This nice little gang consisted of Aunt Victoire, a “baroness” of the underhanded (Suzy Delair), Fernand, a gutsy rascal from the slums (Jacques Balutin) and Norbert Beaufumé (Francis Perrin), a petulant con artist whose pathological lying has driven him to maintaining two separate families.
Delerue writes a main theme based on an accordion waltz which reminds us of the appealing and amiable nature of this comedy “à la française”. He comes up with a version of this for clarinet, associated with the baroness. He also selects a number of soloist timbres to accompany certain of the characters such as the vibraphone for the star Linda Marlène (Bernadette Lafont), the piano for Frédo (André Pousse), a night-club manager, the bassoon for Bébert (Jo Dalat), a vagrant man swindled by Norbert. The suspense scenes are accompanied by a jazz ambiance dominated by double-bass, clarinet and muted trumpet. The tone is light and playful.

Adapted from a novel by Gustave Flaubert, L’Éducation sentimentale describes the life of Frédéric Moreau, (Jean-Pierre Léaud), a young man living through the revolution of 1848 and the founding of the Second French Empire, and his love for Marie Arnoux, an older woman (Françoise Fabian).
Delerue chose to express Frédéric’s passions through a melancholy musical theme, a slow waltz led on by the delicate harp of Lily Laskine. It emphasizes romance and sadness. The rest of the score relies heavily on recreation of the music of the era, accompanying ballroom and masquerade soirée scenes. A lineup of strings, brass and percussion enlivens sequences depicting revolt and insurrection.

Georges Delerue's gift for melody and enormous versatility are once again demonstrated with these stunningly beautiful scores for jazz combo and orchestra featuring his beloved strings, solo flute, piano and harp.

Music Box Records explores once more the television scope of Georges Delerue's music and presents complete scores from master tapes courtesy of Delerue's archives. Conceived and written like music for cinema, these two marvellous scores show again the talented skills of the French composer for the TV screen.