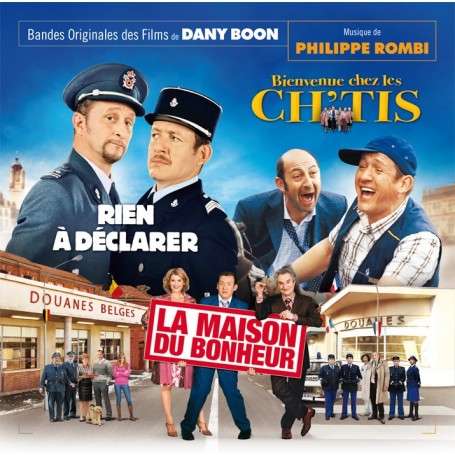 55 minutes of music, including over 40 minutes of previously unreleased music.
12-page CD booklet with French and English by Florent Groult.

Music Box Records pays tribute to the fruitful collaboration between French director-actor Dany Boon and composer Philippe Rombi (Merry Christmas, Swimming Pool, War of the Buttons) with three original motion picture soundtracks: La Maison du bonheur / The House of Happiness (2006), Rien à déclarer / Nothing to Declare (2010) and Bienvenue chez les Ch'tis / Welcome to the Land of Shtis (2008). We are pleased to present for the very first time on the same CD the complete scores of never-before-released La Maison du bonheur and Rien à déclarer with a selection of main cues of previously released Bienvenue chez les Ch'tis, adding a new version of the delightful piece for chimes.

Philippe Rombi met Dany Boon for the first time behind the scenes during the promotion of Joyeux Noël. The two men hit it off immediately: “When we did La Maison du bonheur together, there was a kind of musical meeting of minds that was immediate. When I had Dany listen to my first ideas for the music, he put his faith in me,” the composer exclaimed. And listening to the three scores presented here, it isn’t difficult to understand why.

If each score develops its own thematic ideas and melodic attributes (a lively main theme, cheerful and joyous for La Maison du bonheur; an amicable waltz, charming and full of life for Bienvenue chez les Ch'tis; a truculent piece, at times circumspect, at times brash for Rien à déclarer), allied with a continual refinement of the orchestration, they also reflect one another, especially in regard to certain common qualities that, it is to be imagined willingly, could only end in seducing a personality with such natural generosity as possessed by Dany Boon.

And then there is at the heart of these musical pieces an unfailing tenderness, which Philippe Rombi instinctively discerned in the background. There is something reminiscent of the power which, in its own time, linked together the music of Georges Delerue and the images of Philippe de Broca. As much in its form as in its foundation, each score gives this delicious feeling of never neglecting or bypassing the simplest things.

"Rombi like Delerue takes a simple theme or motif and turns it into an intricate and fragile sounding tone poem that at times although making only a fleeting appearance manages to add depth and greater atmosphere to any scene within a film." (Movie Music International)