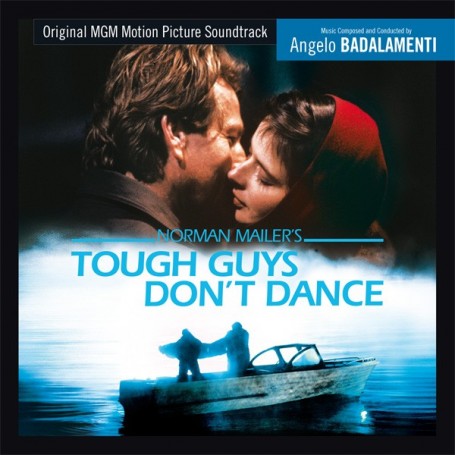 Wannabe writer Tim Madden (Ryan O'Neal), who is prone to blackouts, awakens from a two-week bender to discover a pool of blood in his car, a blond woman's severed head in his marijuana stash, and the new Provincetown, Massachusetts police chief, Captain Luther Regency (Wings Hauser), shacked up with his former girlfriend Madeleine (Isabella Rossellini). Tim must piece together the hazy events of the night before to solve a murder he may – or may not – have committed.

Having memorably continued to musically examine the depths of human nature in such scores as Twin Peaks: Fire Walk With Me, The Comfort of Strangers and Mulholland Drive, Tough Guys Don’t Dance still stands as one of Angelo Badalamenti’s most deliciously unhinged scores. Much like the movie, it’s full of soaring drama and subversive humor. “The film was oversized and outlandish at times because Norman had a big personality, and the nature of the film required music to adopt some of those qualities,” the composer remembers.

Transferred from the original 2" 24-track analog session masters and 1/2" 2-track album mixes stored in mint condition at MGM vaults, this romantic score recorded in Prague is presented in beautiful stereo sound. This present expanded edition features unreleased and unused cues composed by Angelo Badalamenti. The melody has the kind of swooning nostalgia that could befit a romantic score from Hollywood’s heyday. The score is very eclectic and filled with melodic exuberance, beautifully tragedy and impressionistic suspense. It also features two songs co-composed with lyricists Danielle Badalamenti and Norman Mailer and performed by Mel and Pam Tillis: the disco pop-rock song Real Man and the country song You'll Come Back (You Always Do).

"Badalamenti has fashioned a score that at times evokes the atmosphere of The Lost Weekend, The Maltese Falcon and Laura." (Movie Music International)

"This score is very much Badalamenti's sound - at times, the music is dark, brooding and mysterious like the music that dominated Blue Velvet." (Examiner)