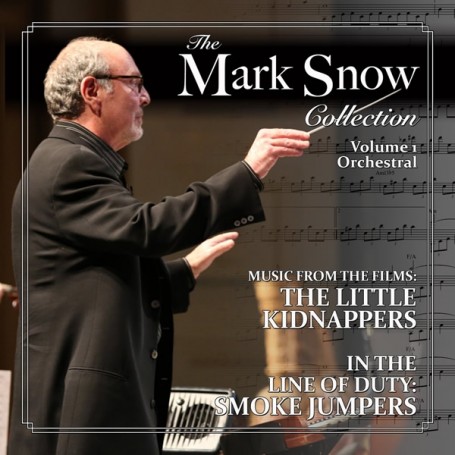 Dragon’s Domain Records presents THE MARK SNOW COLLECTION, VOLUME 1, featuring two superlative orchestral scores composed by Mark Snow (THE X FILES, SMALLVILLE, GHOST WHISPERER) for select television movies from the 1990s. The first, THE LITTLE KIDNAPPERS, is a remake of a family drama set in northeastern Canada; the second, SMOKE JUMPERS, is based on a true story, a portrait of heroism and sacrifice in the midst of a deadly Colorado wildfire. Both scores show how Mark Snow can wield an energetic orchestra and an exceptional melody into an effective and dramatic piece of film music storytelling.

THE LITTLE KIDNAPPERS is a family friendly TV movie co-produced by the Disney Channel and the Canadian Broadcasting Corporation, filmed on location in Nova Scotia and Halifax, Canada. THE LITTLE KIDNAPPERS tells the story of two orphans who are sent to Nova Scotia from England to live with their grandfather James MacKenzie (Charlton Heston), a bitter and hard-hearted Scotsman of advanced age whose furious anger over his son’s death at the hands of Dutch soldiers during the Second Boer War remains undiminished and focused largely on his genial Dutch neighbors. The film title reflects an episode in the original short story written by Neil Paterson where the two young boys find a neighbor’s baby, left briefly unattended, and, thinking it a Dutch orphan, decide to care for the child themselves and keep it from their grandfather. Ultimately the themes of the film are those of redemption and reconciliation as, through the circumstances of its story, MacKenzie learns to forgive his innocent neighbors and free himself from his long-standing enmity towards the countrymen of those distant Boer soldiers. Snow’s music ranges from his wonderfully lyrical main theme with its a captivating melody to eloquent flute interludes that are reflective of the film’s coastal village setting, and various musical elements of danger and reconciliation as demanded by the film’s story.

SMOKE JUMPERS is inspired by the true story of wildland firefighter Don Mackey and his wife René before and during the tragic loss of fourteen firefighters on the South Canyon Fire on Storm King Mountain, Colorado, in 1994. The film stars Adam Baldwin (THE X FILES’ Alien Bounty Hunter) as Don Mackey, whose love of danger, as the movie has it, threatens his relationship with his wife (Lindsay Frost) and family. The movie was filmed in Martell in wooded northeastern California, including at the California Dept. of Forestry & Fire Protection’s [now CAL FIRE] Amador-El Dorado unit headquarters. Bob Bente, a U.S. Forest Service foreman and trainer for a smoke jumper unit based in Redding, California, served as Smoke Jumper Technical Advisor for the film; and the real René Mackey assisted as a production consultant. The score is built around a brassy theme that has a lot of bravado to it for the Adam Baldwin character and his elite team; there’s also a more intimate theme for woodwinds and piano that covers the central love story of the film. Performed by an orchestra of about 60 players, Snow’s music is thickly orchestrated for heroic brass and percussion, providing the right atmosphere for the firefighters as they parachute in to danger.