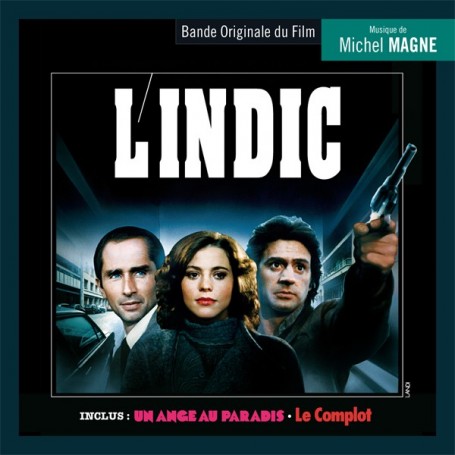 Based on a novel written by Roger Borniche, L'Indic is a detective story. Ange Malaggione (Bernard-Pierre Donnadieu), a boss in the shadowy milieu of Corsica’s criminal underworld, shows up to avenge the death of his son. He is assisted by Dominique (Thierry Lhermitte), who has just met Sylvia (Pascale Rocard). He falls in love very quickly, passing himself off to her as a businessman. But the police are surveying the activities of the Corsican gang and one of the principal inspectors, Bertrand (Daniel Auteuil), establishes contact with Sylvia in order to reveal to her the true character of her lover and to persuade her to serve him as an informant.
For this score, Michel Magne wrote a great love theme on piano and strings, enhanced by the use of the bandoneon played by the famous accordionist Gilbert Roussel. For the action and suspense sequences, the composer embellishes the ambience with the use of percussion conjoined with grave tones from piano or flute.

Two other scores, both dated from 1973, are also presented here for the first time on CD. It was at a time when Magne composed the music for the films by Jean Yanne and Roger Vadim. Un Ange au paradis tells the banal and pathetic story of Mouton, organizer of funeral arrangements (Michel Aumont), married to a former prostitute (Catherine Samie) whom he has partially purchased from her go-between. Magne composed a refrain with several variations accompanying scenes that were at once romantic and burlesque. This new expanded edition contains the two previously cues already issued on EP by CAM plus two unreleased cues.
Le Complot tells the story of a “plot” aimed at liberating one of the generals of the O.A.S., the secret counterinsurgency army, held in the prison at Tulle during the Algerian War. Michel Magne wrote a somber and melancholic theme with an oppressive female voice and a plaintive harmonica.