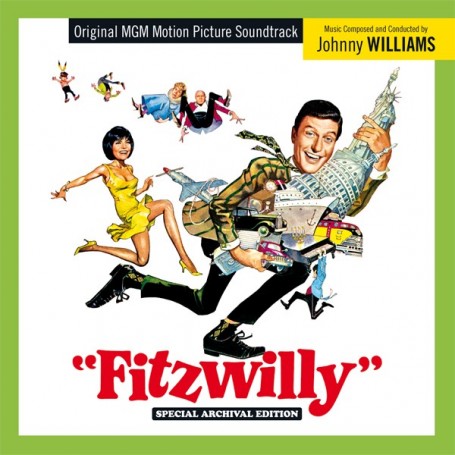 Special Archival Edition
Long-awaited re-issue of out-of-print soundtrack with complete score as a bonus.
78 minutes of music, including 45 minutes of music never released before.
12-page CD booklet with liner notes by Gergely Hubai.

Music Box Records is proud to present one of its most ambitious releases yet - a classic John Williams score from the last ever film that credited him as Johnny!

Before he shaped film music history with Jaws, or the Star Wars franchise, John Williams worked on a lot of comedies which already hinted at the unrealized genius of the Maestro. One such title was Fitzwilly, a yuletide comedy starring Dick Van Dyke (from The Dick Van Dyke Show) and Barbara Feldon (Agent 99 from Get Smart, making her television debut here).

The story is about the titular butler Fitzwilly (Van Dyke), who runs a number of elaborate scams in order to help his master, a kind old lady who doesn't realize she doesn't have any money left. When a new secretary (Felton) is hired at the mansion, Fitzwilly pretend to fall in love with girl in order to scare her away and keep the business running. When he starts falling for the secretary, our hero must fight his conscience on following the right path while simultaneously planning his greatest heist: breaking into a department store at Christmas!

John Williams' enchanting score is built around two key themes: Fitzwilly's pompous march which offers a comedic underscoring of the scheming butler running his usual errands to make enough money for keeping up the lie. The other theme is the love theme, the basis of the song "Make Me Rainbows" co-written with Alan and Marilyn Bergman. The rest of Williams' score projects his usual 60s comedy charm (his caper comedies Penelope and How to Steal a Million are good indicators of what to expect here), but the suspense material for Barbara Felton's investigation predates similar tense moments from the composer's Indiana Jones scores!

The original soundtrack album to Fitzwilly (actually a re-recording) was released by United Artists on LP and the same tracks were issued in 2004 by Varese Sarabande. The out-of-print CD has since become a sought after collector's item, so we decided to revisit the classic title and put our own spin on it.

In addition to the classic LP program, we also gained access to the monaural music stem of the complete soundtrack, courtesy of MGM - including an isolated score. While the quality of this stem is far from perfect, it is the only available source to hear John Williams' complete score for the first time.

This archival expansion of this classic title falls in line with other recent classic releases which used similar sources as our release of Fitzwilly. With the help of our engineer, we did our best to fix the fluctuating volume levels and remove the low-level dialogue that may occasionally bleed over from the film's audio masters. As such, we kindly ask you to listen to our samples and make a decision on the quality yourself.

This classic LP-program and the archival presentation of the complete score on the same disc offers a rare opportunity to hear a lesser-known Williams title in two different presentations. The handsome package is rounded out by 12-page liner notes with Gergely Hubai sharing his comments about the film and the score.