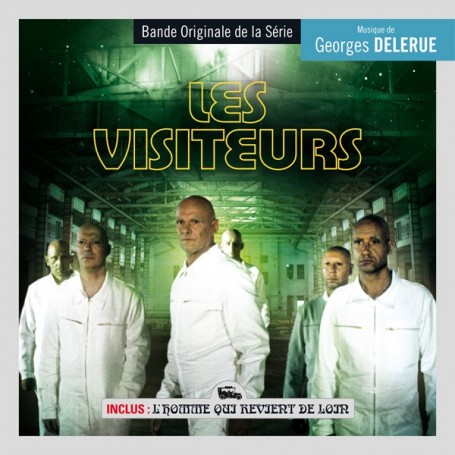 Television introduced itself into the filmography of Georges Delerue starting in the 1950s. He composed for the pioneers of the media form, including Stellio Lorenzi, Marcel Bluwal and Claude Barma. Throughout his career, he was to make his mark with a characteristic sound in works of a diverse range, from Jacquou Le Croquant to Les Rois Maudits and including Thibaud Ou Les Croisades and La Cloche Tibétaine. Among the more than 150 films and series set to music by Delerue for the small screen, productions by Michel Wyn represent a not insignificant share.

This present edition pairs for the fist time two unreleased scores composed by Georges Delerue for the significant works of French director Michel Wyn: Gaston Leroux's adaptation of L’Homme qui revient de loin / The Man Who Came Back from the Death (1972) and the sci-fi TV series Les Visiteurs / The Visitors (1980), both adapted by the famous screenwriter Claude Desailly (Les Brigades du Tigre and Michel Strogoff).

L’Homme qui revient de loin tells the story of a rich industrialist and arrogant owner of a French château who disappears suddenly, leaving the direction of his company to his younger brother, Jacques with his ambitious wife Fanny. But soon, the ghost of the missing brother arrives to disrupt the couple’s dream life.
Les Visiteurs is about the disappearance of a team of six extraterrestrials coming to study Earth. The Empire of the Four Planets dispatch two police detectives to find them. They slip into two human bodies just as they are about to die, those of a Frenchman Jean-Louis and a German woman Renate, and resuscitate them so as to pursue their mission.

Georges Delerue's gift for melody and enormous versatility are once again demonstrated with these stunningly beautiful scores for orchestra featuring his beloved strings, solo flute, piano, harp and Austrian zither, an instrument of his predilection. Adventure, action, mystery, exoticism, romantic drama and flavorful source music for both scores!

Music Box Records explores this time the television scope of Georges Delerue's music and presents complete scores in stereo from original stereo session masters stored in Warner Chappell vaults. Conceived and written like music for cinema, these two marvellous scores show again the talented skills of the French composer for the screen.

This present edition is the first volume of coming CD releases dedicated to the television soundtracks composed by Georges Delerue.