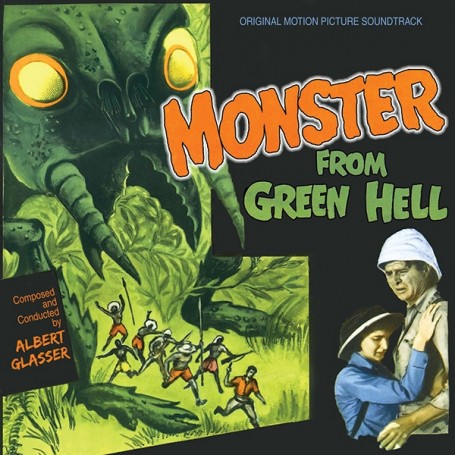 One of a spate of big bug pictures, this one has something to do with scientists sending small animals into space to see if the gamma rays produce mutations. Hint: They do. For a film like Monster from Green Hell, one needs the perfect composer, and they got him – Albert Glasser, whose music graced some of the most beloved and classic low-budget films of the 1950s, including several other big bug movies like Beginning of the End and Earth vs. the Spider, as well as such other films as The Cyclops, The Amazing Colossal Man, Attack of the Puppet People, War of the Colossal Beast, and The Boy and the Pirates.

Albert Glasser’s music for Monster from Green Hell is classic Glasser – all blaring brass and screeching strings and jagged rhythms, bombastically keeping the movie trudging along for all of its seventy-three endless minutes, and making it seem like something is actually happening. Glasser was an expert at this kind of thing, and clearly in his musical element.

This release was prepared from Albert Glasser’s own tapes and our restoration expert, Chris Malone, has done his always-masterful job in transferring them and making them sound as good as possible.