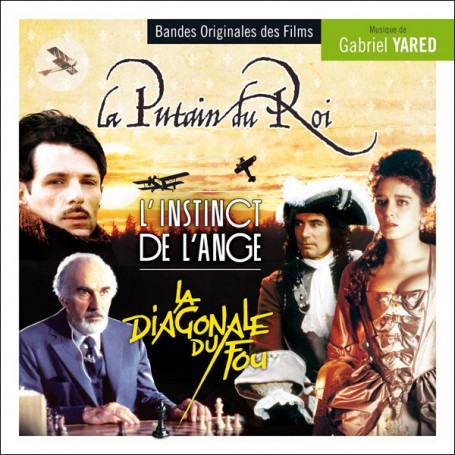 A unique collaboration between Gabriel Yared and Axel Corti, La Putain du Roi narrates the tumultuous passion experienced, towards the end of the seventeenth century, by the King of Piedmont Vittorio Alfonso (the dashing Timothy Dalton) and a young noble woman of modest means, Jeanne Princesse de Luynes (the affecting Valeria Golino), wife of Count Alessandro di Verua (excellently performed by Stéphane Freiss as scorned husband).
The beautiful, classical-sounding orchestral score is a romantic and thematic work which calls as much on authentic pieces played textually (Allegri’s Miserere and Purcell’s Music for the Queen Mary) as on works entirely revisited for the circumstance by Yared’s careful hand: the Passacaglia and Fugue in C minor for organ, Bach’s BWV 582 (itself erected on a motif composed by André Raison) and one of the the most moving of Mozart’s melodies, the slow movement of his Piano Concerto N°23 in A major, KV 488. With La Putain du Roi and other titles such as the recent A Royal Affair, the aesthete Yared proves that he can slip with ease and refinement into the genre of the period piece.

Gabriel Yared cites his two collaborations with Dembo as “The two musical projects I cherished the most because they were completely assumed.” For Yared, such a connection with a director, one he would subsequently establish again with Anthony Minghella, is absolutely essential to writing music that corresponds to his personality and as a consequence to the images he creates.
La Diagonale du Fou depicts a fictional story based on two duels in 1978 and 1981, recorded in the annals for having set two sacred giants of chess, Soviets Anatoli Karpov and Viktor Kortchnoï against one another. The film stars Michel Piccoli, Alexandre Arbatt, Liv Ullmann and Leslie Caron.
The score is based on the Prelude for organ by modern classical composer César Franck. Yared preserves only the “core” of the orchestra, deliberately eliminating the beauty of upper register strings as well as woodwinds and brass. Establishing an analogy between the “fleshy” aspect of the alto singer and the game of chess, he conceives a symphony for an alto soloist, six cellos and six double basses. The result is a musical piece written for strings that is both austere and subtle, typical of its author, which intrudes sparingly into the picture but in a manner heavy-laden with meaning.