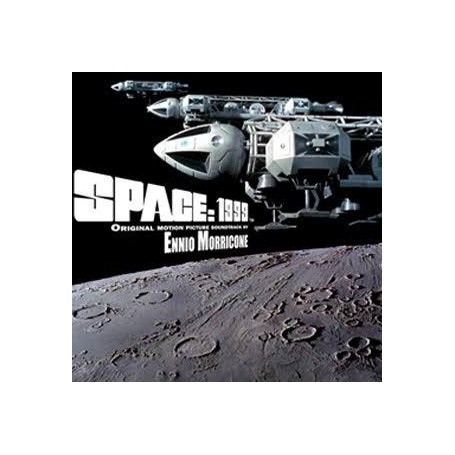 SPACE: 1999 premiered in Italian theatres on January 14, 1975, and was created through the process of editing together three episodes from season one of the TV series: ''Breakaway,'' ''Ring Around the Moon'' and ''Another Time, Another Place.''
The theatrical release of SPACE: 1999 predated the series' debut on Italian television by a year, with the first six episodes being broadcast from January 31, 1976. Six more episodes followed in July and the remaining twelve episodes in the fall of the same year.

The series' original iconic score was not used for the Italian theatrical version (the series originally premiered on British television on September 4, 1975), instead being replaced with a fascinating score by Ennio Morricone, who composed original material featuring frantic jazz themes and futuristic electronic sequences reminiscent of Barry Gray's work on UFO.
This release also includes avant-garde material by Morricone that was carefully selected as background music for various scenes in the movie, taken directly from the RCA promotional series of library vinyl LPs titled ''Dimensioni Sonore,'' performed by symphonic orchestra and presented here in full stereo. Also included is the final large orchestral theme heard over the end credits, featuring vocals by Edda Dell'Orso and I Cantori Moderni di Alessandroni. This theme was reused for the 1979 mini-series Orient Express, again scored by Ennio Morricone.

The CD has a running time of 70:11 and comes with a full-color, 20-page booklet containing archive stills, a foreword from Fanderson chairman Nick Williams (the official Fanderson UK fan club) and plot synopses and credits for the three original episodes.

This release was officially approved by ITV Studios and will be available from September 13, 2016, the day in which the moon separated from Earth's orbit in SPACE: 1999.