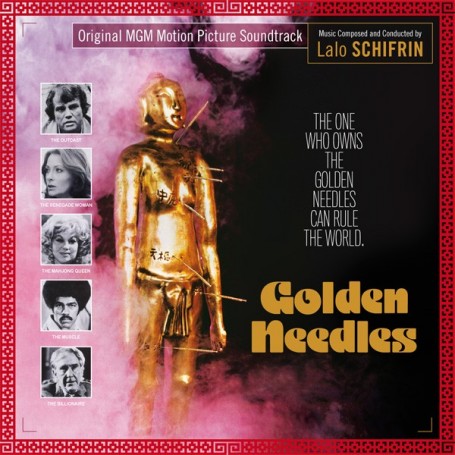 In order to celebrate its 50th CD release, Music Box Records is very proud to present the original soundtrack from Golden Needles (1974) by Lalo Schifrin. Capitalizing on the early ‘70s kung-fu craze, the film tells the story of a mysterious statue which contains the secret location of acupuncture points that may cure many illnesses – or lead to instant death if they are applied in the wrong order. When rival gangs start a fierce hunt after the statue, it’s up to Dan (Joe Don Baker) to get the statue for the mysterious girl who had hired him. Briefly teaming up with blaxploitation icon Jim Kelly, Baker is ready to deliver swift punches, escape death traps and throw people across panes until he gets what he wants…

Golden Needles was directed by Robert Clouse, who brought along composer Lalo Schifrin from their last successful collaboration, Enter the Dragon. The music is the perfect accompaniment for the east-meets-west scenario and in many ways, it can be viewed as the close cousin of Schifrin’s incredibly influential soundtrack for Bruce Lee’s last film. Featuring cool percussion, infectious jazz licks, epic action set pieces and even a tender love theme for the unlikely romance of Dan and token femme fatale Felicity, Schifrin’s music for Golden Needles is as great as it is largely forgotten in the shadow of its more esteemed peer – at least until now.

This CD by Music Box Records marks the premiere release of Golden Needles; The only piece of music that has been released from the film was a re-recording on Schifrin’s 2000 compilation album Jazz Goes to Hollywood. This soundtrack presents all the music in mostly chronological order and is accompanied by an 8-page booklet with liner notes by Gergely Hubai who discusses the film and the score. Golden Needles may lack the name recognition of Bullitt or the cult factor of Enter the Dragon, but the score definitely delivers everything you’d expect from the composer at the top of his game – and it certainly doesn’t disappoint fans of Schifrin or martial arts movies in general.

"Falling into that magical period that produced both Enter the Dragon (1973) and Magnum Force (1973), Golden Needles delivers an exotic blend of both styles... Its action sequences are supported by pacy brass sections, while delicate shimmering cues help confirm and remind us of its oriental roots… The notion of ‘Dirty Harry meets Enter the Dragon’ is often associated with Schifrin (in scores such as Rush Hour)… it’s simply superb." (Darren Allison, Retro Magazine UK)

"One of the most obscure Lalo Schifrin soundtracks of the 70s – a really weird, spooky little record that's filled with moody touches! Schifrin's not in all-out action mode here – and instead experiments with a range of styles – including some warm, jazzy elements that are especially nice – mixed with larger passages that are more powerful, and blend together tense orchestrations with some of the exotic touches you might guess from the story." (The Jazz Chill Corner)

"Schifrin’s funky dulcimer theme dances about with Oriental percussion and jive bongos. Hip flutes groove with guitars and lush romance, while such oddball touches as a player piano meets in a Hong Kong alley with fuzz guitars. And when it comes to pure adrenalin the Schifrin foot-fist way, a nearly ten minute “Harbor Chase,” is an exhilaratingly virtuoso exercise in keeping a thematically breakneck combo of horns, rhythm sections and sizzling electronics veering between tingling synth suspense and 70s jazz beat-downs." (Daniel Schweiger, AssignmentX.com)