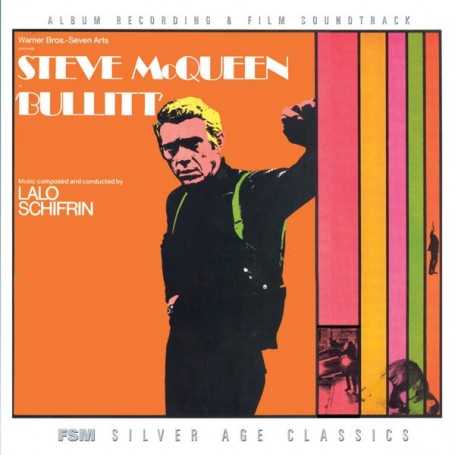 FSM presents one of the most quintessentially “cool” soundtracks ever: Lalo Schifrin’s score for the classic urban crime drama, Bullitt (1968). The film stars Steve McQueen as San Francisco police detective Frank Bullitt, caught up with protecting a Chicago mobster from vengeful Mafia hit-men while dealing with an ambitious, sleazy politician portrayed by Robert Vaughn. With its riveting story, realistic settings, taut screenplay and quasi-documentary cinematography, it brought a new depth to McQueen’s portrayal of tough characters (this one on the right side of the law).

An essential part of the film’s success was its economical, nervous jazz score; the Argentinean-born, classically trained Schifrin was then at the height of the fame generated by his iconic Mission: Impossible television theme. The film is judiciously spotted, with relatively little “action” music (the famous car chase is unscored) but several atmospheric and evocative source cues. Schifrin himself described it as “very simple” and “completely based on the blues.”

The CD also includes the never-before-released complete film soundtrack itself, recorded at the Warner Bros. scoring stage in Burbank by legendary engineer Dan Wallin. These tracks have been newly mixed and mastered from ½” three-track tape stored at the studio. While some score passages and cues are virtually identical to the record album, many of the film soundtrack’s softer, moodier cues were not chosen for the LP—or had certain passages rewritten. And some were dropped from the film itself, so have never been heard before by the public—until now.

The booklet includes a perceptive, in-depth essay on the film and its score by John Bender and detailed track-by-track commentary by Alexander Kaplan. Bullitt is an essential purchase for any “cool” soundtrack collection (or collector), and adds one more title to FSM’s expanding catalog of scores by a living legend of film music.