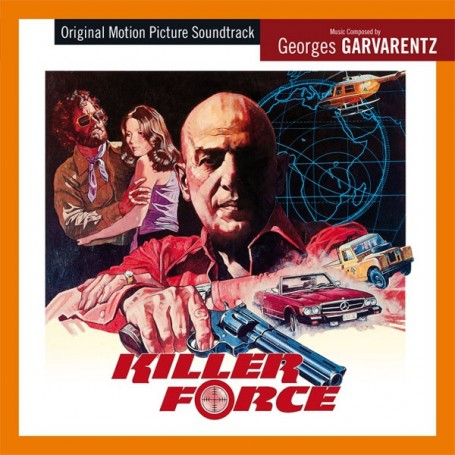 KILLER FORCE • THE CORRUPT ONES

Music Box Records is pleased to present on the same CD two original motion picture soundtracks composed by Georges Garvarentz: Killer Force (The Diamond Mercenaries) directed in 1976 by Val Guest (The Day the Earth Caught Fire, Casino Royale) and The Corrupt Ones (The Peking Medallion) directed in 1967 by James Hill (A Study in Terror, Born Free) and Frank Winterstein.

Shot in South Africa, Killer Force spans an international cast including Peter Fonda, Telly Savalas, Maud Adams, Christopher Lee and O.J. Simpson. The film tells the story of a complicated diamond heist from a local mine where insider Fonda is pursued by the relentless Savalas across the desert. Garvarentz’s up-tempo, funky score includes a pumping chase theme across the dunes, a love theme and a campy disco tracks “The Old Fashioned Way” (with lyrics by Charles Aznavour).

The Corrupt Ones stars Robert Stack, Elke Sommer and Nancy Kwan in a James Bond send-off taking place in the Far East. All three characters are in pursuit of the ultimate MacGuffin called The Peking Medallion. Part 007, part Indiana Jones, tons of fun. Garvarentz’s music is spearheaded by the Dusty Springfield theme song entitled “The Corrupt Ones”, also featured in lovely instrumental variations during the score. The release also includes addictive laid-back source music for the casinos and energetic action music for uncovering the artifact.

Both scores were previously released on LPs: we recreate the exact same programs, plus provide a little bonus for The Corrupt Ones. During the production of the CD, we came across an unlabelled tape that contained several cues not on the LP: the worthiest selections are included at the end as a bonus of previously unreleased music.