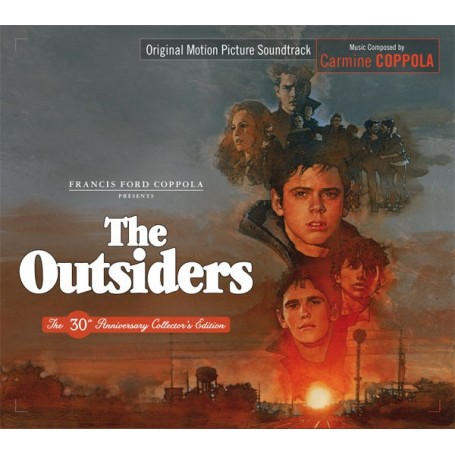 The Outsiders tells the story of the ongoing conflict between two "clans" (the Socs and the Greasers) in 60s-era Tulsa, Oklahoma. Its universal power has continued to hold sway for new, misunderstood generations who hear a far bigger picture as they attempt to find their way in an often-cruel world.

For those with a passion for old school scoring, this remastered 30th anniversary edition of Carmine Coppola’s score for The Outsiders now sings with new orchestral power. Francis Ford Coppola wanted the score to have a similarly epic scope, music that would recall the unabashed orchestral passion that Max Steiner and Leonard Rosenman gave to the films he was modeling The Outsiders on. The dramatic orchestral score highlights Coppola’s allusions in his film to another famous epic, Gone With the Wind, the novel of which figures prominently in the film’s story.

This new album presentation has been supervised by Francis Ford Coppola and assembled from the 2" 24-track session masters stored in American Zoetrope vaults. Newly mixed, edited and expanded to Coppola’s original, musically lavish intentions by sound designer Richard Beggs (Francis Ford Coppola's long-time collaborator), the score of The Outsiders proves itself even more vital in making Coppola’s "epic story for children" into iconic, star-making youth cinema. This would be the first, and lasting musical impression of teen angst as the stuff of grand, emotional opera, fueled by an elder statesman composer who’d lived an artistic life on the edge since his own youth.