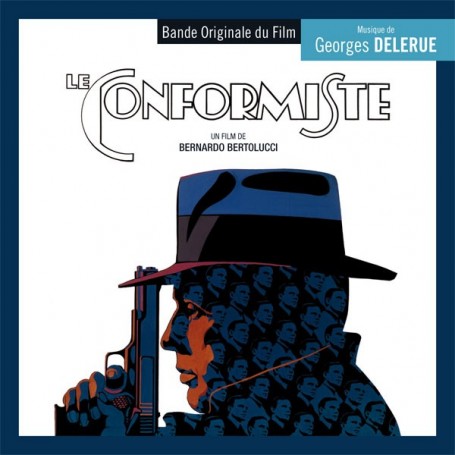 Composed and Conducted by Georges DELERUE

Adapted from a novel by Alberto Moravia, The Conformist is portrayed as a chronicle of the fascist years experienced from the point of view of an average but nevertheless zealous individual (Jean-Louis Trintignant) under the thrall both of the party and of the moral norms of the time, but on a human level quite cowardly.
Bernardo Bertolucci made his choice on Georges Delerue in reference to the music of the Nouvelle Vague but also because of his ties with Moravia through Jean-Luc Godard's Il Disprezzo (Contempt) (1963).
This new expanded edition offers thirty-six minutes, including fifteen previously unreleased on any earlier version, enabling us to appreciate the extent of the composer’s work and especially the heterogeneity of the material. Based on a main melancholy theme, he refers back to it right through the film with varied instrumentation and dissonant registers. The score navigates between source music pieces whose the most of them are composed by Delerue himself and effective dramatic underscoring. It is the thematic and orchestral diversity that produces the score’s originality. It moves from use of ondes Martenot, to shimmering instrumentation counterpoised with the lyrical quality of some tunes, to darker pieces. This expanded reissue gives listeners new insight into Georges Delerue’s beautiful music score for Bernardo Bertolucci's masterpiece.
We have made every effort to improve the sound quality of the only existing 1/4" mono master tapes for The Conformist. Forty years later, this is the official expanded CD release of one of Georges Delerue's famous scores.

As a bonus, this CD includes the never-before released soundtrack La Petite Fille en Velours Bleu (Little Girl in Blue Velvet) and offers the complete short score composed by Georges Delerue for the film.
Featuring Michel Piccoli and Claudia Cardinale, the film is a chronicle of the war years, during which an Austrian Jewish surgeon, a refugee housed in a villa on the French Riviera, becomes enamoured of the daughter of a friend, who is only thirteen-year-old. This theme of a love triangle in a bourgeois milieu provided Delerue with a new opportunity to depict musically a behind-closed-doors ambience in the heavy atmosphere of the war years. The tone is lighter and playful, offering succulent piano bar themes contrasting with darker musical passages. The main theme played beautifully by one of his lucky-mascot soloists (zither-player Monique Rollin) evokes the ritornellos of The Day of the Dolphin.
La Petite Fille en Velours Bleu is one of Delerue’s little-known music soundtracks begging to be (re)discovered.