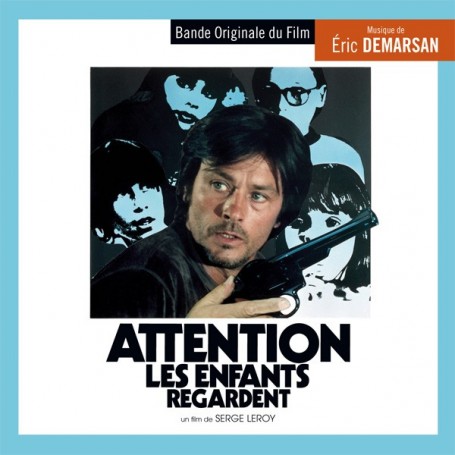 Attention, les Enfants Regardent tells the story of four children who, through an act of carelessness, accidentally cause the death of their governor, decide to hush things up and cover up the incident, without knowing that someone else has been a chance witness to the event and fully intends to profit from the fact. This nefarious character, a role quite out of character for Alain Delon (also the producer here), reveals himself directly to be the narrator of the plot and at the extent the Ogre of children’s tales.
Éric Demarsan infuses an unsettling sense of the unreal with the use of a high-pitched ghostly glass-harmonica and angelic voices from a children's choir. Beautiful melodic phrases on the harpsichord, on strings or on oboe, give the score a sense of melancholy and profound disenchantment. The composer also knows how to play tension: a growing unease expressed by the strings, themselves shattered by a saturated chord on electric guitar and woodwinds played in concert that grab hold of you, a tension in the orchestra. It is one of his most daring scores for a film which needs to be rediscovered.

L’Indiscrétion tells the story of an IT specialist with no life-story and on holiday (Jean Rochefort) picks up on the radio in his apartment the transmissions of a micro-transmitter spying on the conversations of a couple in a neighbouring street. The artistic pretensions appear more down-to-earth and the result of which is more immediately easy to grasp. The score is based on a melody with syncopations, lascivious phrases on an alluring saxophone and the various instrumental configurations of typical 1980s sounds (mixing strings, trumpet, piano, electric guitars, bass, drums and synthesizer) that bear the unmistakable imprint that Ennio Morricone had just left on the genre in France.

Combining on this album the scores to Attention, Les Enfants Regardent and L’Indiscrétion, with an enhanced presentation of unreleased material, this release presents two radically different approaches that, each in its own way, testifies to one and the same fact: more than a simple composer for the screen, Éric Demarsan is above all a musical screenwriter, who is both talented and meticulous.