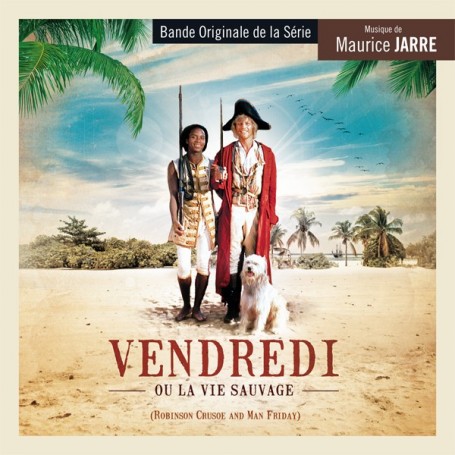 Composed and Conducted by Maurice JARRE

Vendredi ou les Limbes du Pacifique is the first published novel by Michel Tournier which won the « Grand Prix du roman » of the Académie Française in 1967. The author published a simpler and briefer version of the story in 1971 called Vendredi ou la Vie sauvage.

Adapted for television in three episodes by Gérard Vergez in 1981, such a project required the significant financial, technological and logistical ressources. It was thus decided to film in French and English simultaneously, with the celebrated English actor Michael York, and a young American dancer, Gene Anthony Ray, who had recently made a name for himself appearing in Alan Parker’s Fame.

A result of the international character of the project, the process of choosing a composer for the music led to the doorstep of Maurice Jarre who had gained renown for his composition of the scores for David Lean’s two films Lawrence of Arabia (1962) and Doctor Zhivago (1965), which had become worldwide successes.

It was a period when Maurice Jarre worked on some television projects such as the famous TV mini-series Shogun starring Richard Chamberlain and Toshirô Mifune and just before being involved with the mega-production Lion of the Desert, produced and directed by Mustapha Akkad. The score of Vendredi ou la Vie sauvage (Robinson and Man Friday) offers a very rich symphonic score by turns melodic, flavorful and exciting. The numerous themes perfectly evoke all the wide-ranging emotions, from the savagery of island life (muted percussive motif played on bass kettle-drums...) to the beauty and solemnity of friendship between Robinson and Friday (use of Ondes Martenot and solist instruments such as harp, oboe...).

Music Box Records presents an expanded edition of the beautifully crafted score of Vendredi ou la Vie sauvage featuring the same content as the original LP record issued in 1987, offering nearly 20 minutes of never before released music and including the title song performed by Alexandra Brown.