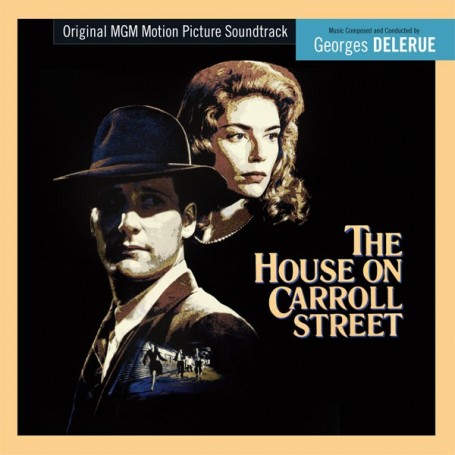 THE HOUSE ON CARROLL STREET

Transferred from the original four-track session tapes, this high-powered and noirish score recorded at Abbey Road Studios in London, is presented in beautiful stereo sound with around 35 minutes of pure Delerue: beautiful melancholy, darkly powerful and swirling strings, suspense scoring, tension with pulse-pounding chase music...
The House on Carroll Street is directed by Peter Yates (Bullitt, The Deep and Suspect) and written by Walter Bernstein (screenwriter of The Molly Maguires and An Almost Perfect Affair). This romantic thriller with Hitchcockian tension tells the story of Emily Crane (Kelly McGillis), an idealistic young woman who uncovers a dangerous conspiracy to smuggle Nazi War criminals into the United States six years after the end of World War II. Also starring Jeff Daniels, Mandy Patinkin and Jessica Tandy.
Though best known in Europe, and later Hollywood, for a lyrical touch that often blended romance and tragedy in such scores as Jules and Jim, Contempt, Steel Magnolias and Beaches, Academy Award Winner Georges Delerue also brought this anguished quality to political thrillers whose noble heroes hopelessly went against the military-industrial complex, a somber tone that inflected The Day of the Dolphin, Salvador and Silkwood, as well as the 1940s LA noir of True Confessions. When given the opportunity to use brooding emotion as this Street’s driving force, Georges Delerue once again would prove his ability to depict the profoundness of the human soul.
Politically themed films continued to burn in the composer’s heart with To Kill A Priest, A Show of Force and Dien Bien Phu. Yet for all of the forceful arguments his music would conjure, the issue always remained one of soulfulness for a composer who poetically captured humanity at its best in the worst of times, a period that he’d so hauntingly, and uncompromisingly evoke for The House on Carroll Street. It is definitely one of his darker and solemn scores ever written for cinema.