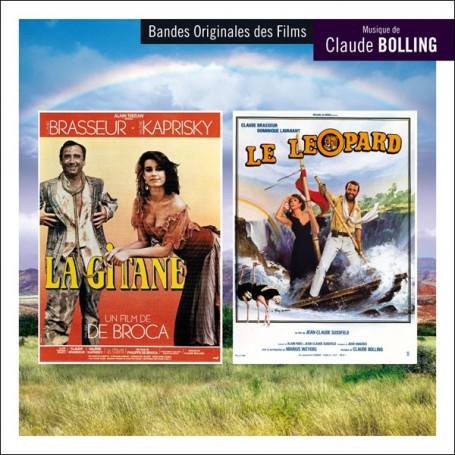 Music Box Records is pleased to present on the same CD two original motion picture soundtracks composed and conducted by Claude Bolling. The common point with the two French comedies from the 1980's is French actor Claude Brasseur (Yves Robert's An Elephant Can Be Extremely Deceptive, Claude Sautet's A Simple Story and Claude Pinoteau's The Party): La Gitane / The Gypsy (1986) directed by Philippe de Broca (That Man From Rio, King of Hearts, The Incorrigible) and Le Léopard / The Leopard (1984) directed by Jean-Claude Sussfeld (assistant director of Claude Sautet, Jean-Luc Godard and Yves Boisset).

Screenwriter Jean-Loup Hubert wrote the story of La Gitane about an uptight bank clerk pursued by a free-spirited gyspy. De Broca created a character surrounded by women, shooting the film as a “comedy of manners”. Between his ex-wife, his daughter, his mistress and his secretary, Durieux (Claude Brasseur), a banker, finds himself stuck in a life he must micro-manage down to the letter. His one true love: a Citroën Traction Avant, which he pampers with the greatest of care is stolen from him during a holdup undertaken by some gypsies. The leader of this band is named Mona (Valérie Kaprisky). She comes into Durieux’s life like a violent, devastating whirlwind, and he falls immediately in love.

The director made his choice on Claude Bolling with whom he had already worked on Le Magnifique (1973) and Louisiane (1984). The score plays on three main themes: a gypsy waltz played by Michel Gésina, Christian Escoudé and Raymond Gimenez on guitars and used as a main theme with different orchestrations (twirling in the opening and closing credits, moving for the romantic scenes…), a melancholic theme with the use of the flute underscoring Durieux’s lassitude and a love theme for Hubert and Mona based on extracts from Claude Bolling's “Suite for chamber orchestra and jazz piano trio” composed in classical-jazz crossover style in 1982. Only three themes from La Gitane were before released on several compilations. Music Box Records releases now a complete edition including all the music written and recorded by Claude Bolling for the film.

Le Léopard tells the adventures of writer and adventurer Lartigue (Claude Brasseur) and Pauline Fitzgerald (Dominique Lavanant), an author of crime thrillers, who set out to solve a mystery involving murder and espionage in Africa.

For the musical timbre of the film, Claude Bolling chose to reinforce the images with an atmosphere mixing jazz and African rhythms. He called upon musicians able to blend easily into such a style, including saxophonists François Jeanneau and Jean-Louis Chautemps, trumpet player Eric Le Lann, and the percussionists Marc Chantreau and Michel Delaporte. Bolling gave them licence to improvise widely so as to generate the mysterious noises of the jungle and to devote their full attention to the action sequences. He also composed a romantic theme played by Raymond Guiot on flute for Pauline and Nick Denver, Lartigue’s rival (Marius Weyers, famous for his role in The Gods Must Be Crazy). For this newly remastered version, Music Box Records presents the same LP record program (released in 1984) with main themes of the score.