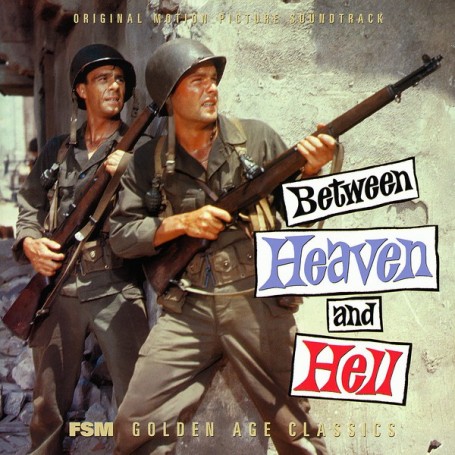 BETWEEN HEAVEN AND HELL / SOLDIER OF FORTUNE

Hugo Friedhofer is the original underappreciated film composer: innovative, dramatically astute, and endlessly interesting. He began his Hollywood career as an orchestrator and co-composer, often working for Erich Wolfgang Korngold and Max Steiner, but once established as a composer wrote completely in his own style, favoring transparent orchestrations, progressive harmonies and a sense of subtlety consistent with his own self-effacing personality. Although chronologically of the Golden Age he pioneered orchestrations and approaches which set the stage for subsequent composers from Leonard Rosenman and Elmer Bernstein to John Williams and Jerry Goldsmith.

Sadly, very little of Friedhofer's work is available on CD. Most of his best scores were written in the 1950s for Twentieth Century-Fox, and FSM is beginning the important process of restoring them with this new doubleheader. Featured for the first time ever are an acclaimed war score in complete form and a long-sought-after "exotic" score in the best representation possible.

Between Heaven and Hell (1956) is a tough-minded story of a affluent young soldier (Robert Wagner) who finds courage and his own humanity on a South Pacific island in WWII. Friedhofer eschewed typical Hollywood heroics in favor of a brooding, atmospheric take on the ambiguities of war, full of texture and blocky chords coalescing into a memorable listening experience. For his main theme Friedhofer drew on the Dies Irae, the traditional chant of the dead, adapting it into an oppressive march for the main title and a furious action cue—one of the genre's all-time best—for the movie's finale. Additionally, the score includes a sublime, bittersweet love theme for the main character's flashbacks to his pre-war life.

Soldier of Fortune (1955) is a Hong Kong-based adventure starring Clark Gable and Susan Hayward for which Friedhofer wrote one of his most unforgettable melodies: a smoky, nostalgic love theme representing everything one would expect from a Hollywood hero. Unlike Between Heaven and Hell, which is presented in complete form in excellent sound quality, Soldier of Fortune suffered severe damage in storage over 46 years, with several cues lost and others in compromised sound. Despite these problems, we have culled the surviving cues into the best possible representation of the score, and it is more than enough to showcase Friedhofer's haunting Asian textures and harmonies—and the great main theme.

The entire CD is in stereo, and comes with the usually thorough FSM liner notes and packaging. It is a richly rewarding tip of the iceberg from the inspired career of Hugo Friedhofer.