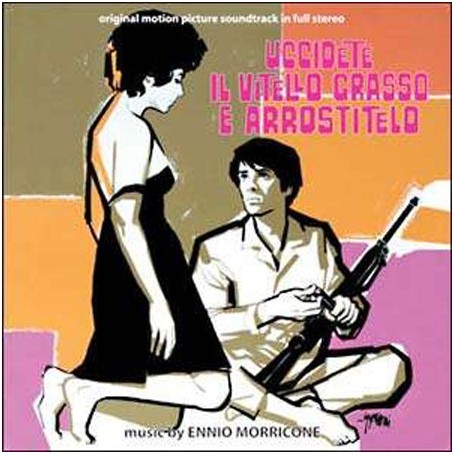 Digitmovies proudly presents the fifth volume dedicated to Italian Giallo movies scored by 2007 Oscar winner Ennio Morricone: "Uccidete il vitello grasso e arrostitelo" (aka "Kill the Fatted Calf") directed in 1969 by Salvatore Samperi and starring Jean Sorel, Marilù Tolo and Maurizio Degli Esposti. This CD project was made possible once again thanks to the help of our friends at C.A.M., where the 1969 original stereo session tapes have been preserved until today. Shortly before his very first US concert in Radio City Music Hall in New York, Maestro Ennio Morricone personally wanted to collaborate with us on the realization of this album modifying the previously issued material available on the 1984 US Long Play album (Cerberus CEM-SP0117) and on its 1991 CD reissue (CAM CSE 051). Considered to be uncongenial, the track "Shake introspettivo" has been eliminated by the author from an artistic point of view. So accordingly this CD was compiled respecting M° Morricone's conception so as to present something new compared with the previous record releases. This particular soundtrack perfectly reflects the plot of the movie situated in a macabre and mysterious Sicily, a giallo-noir full of cruel twists. Ennio Morricone composed a score with a pastoral mood, enriched with canons of the Renaissance but with a stunning modern beat arrangement typical for the late 60's: after a short introduction for flute the joyful theme is developed through trumpet, harpsichord, bass guitar and rhythm (Tr.1), reprised later with a more up-tempo version (Tr. 9). Morricone wrote a romantic and melancholic theme introduced first in Tr.2, and reprised as a beat ballad with bass flute (Tr.4) and with high pitched flute (Tr. 10). Scenes with the young protagonist are emphasized by aggressive and morbid shakes like "Titoli" (Tr. 3) or the one arranged for trumpet and repeatedly interrupted by dissonant chords (Tr.6) and last but not least the one for organ and female voice, between sacred and profane (Tr. 8). The obscure side of the story is emphasized by a long contemporary piece (Tr. 5).