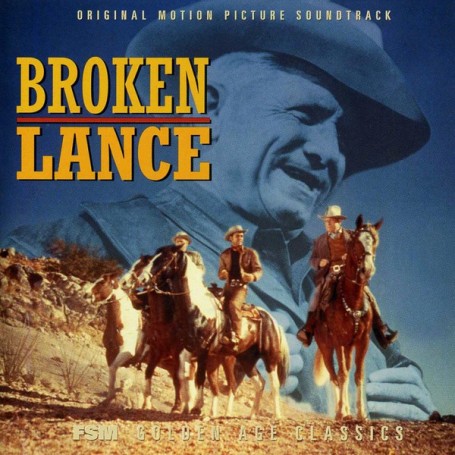 You may not think you are familiar with the music of Leigh Harline, but you are—he wrote (with lyricist Ned Washington) the classic Disney song, "When You Wish Upon a Star," heard in everything from Pinocchio to Close Encounters of the Third Kind. In addition to his work for Disney, Harline (1907-1969) had a long and successful career composing for a variety of studios, including a productive run at Twentieth Century-Fox during the "CinemaScope" era of the 1950s.

One of Harline's best scores at Fox was for Broken Lance (1954), a superior western starring Spencer Tracy as an iron-willed cattle baron losing control of his family. The film was an early "revisionist" western in which traditional settings and characters are given added psychological depth through the realities of encroaching law and order, and the King Lear-like study of sons Robert Wagner and Richard Widmark turned against one another. By all accounts, it is a first-class production.

Fans of the glorious Golden Age of Hollywood scoring have long known of the quality of Harline's Broken Lance score. The composer evokes the requisite Americana and western refrains, but centers his approach on the imposing Tracy figure, with a five-note fanfare sounded at the opening of the main title. This figure dominates the score, much as the Tracy character dominates the film, in everything from solemn, melancholy interludes to exciting, galloping action cues.

In addition, Harline provides an exuberant, joyful melody for the budding love story between Wagner's character and the governor's daughter (Jean Peters), and makes judicious use of an Irish folk song, "My Love, Oh She Is My Love" for the tender relationship between Tracy's character and his Indian wife (Katy Jurado).

Harline's Broken Lance score is presented complete (save for one short cue which was lost) and in chronological order, remixed from the original six-track masters. Liner notes are by Ross Care.