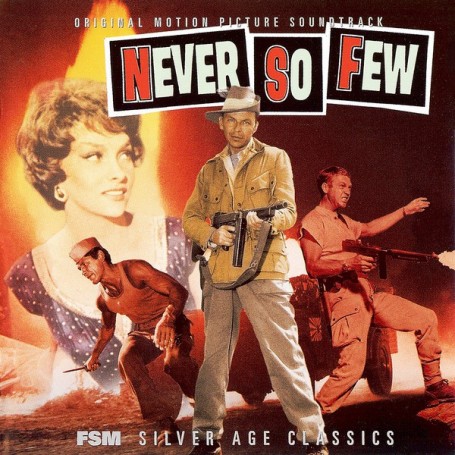 Hugo Friedhofer and Elmer Bernstein worked only occasionally at M-G-M, but they each did a feature film for the studio set on the Asian continent. This CD features the premiere releases of Never So Few (1959) and 7 Women (1966), respectively, each filled with exotic melody and instrumentation.

Never So Few is a WWII romance/adventure starring Frank Sinatra as the leader of a U.S. army unit in Southeast Asia. Known as a "Rat Pack" production (it also starred Peter Lawford) and directed by John Sturges, the film is perhaps most noteworthy for giving Steve McQueen his break on the silver screen. Hugo Friedhofer's score features a dynamic main title with a throbbing ostinato followed by a mournful trumpet solo evoking the losses of war. Friedhofer was no stranger to the war genre and provided a brew of wartime suspense and also romance, as Sinatra romances the voluptuous Gina Lollobrigida. The setting is highlighted by enchanting, Thai-flavored colors.

7 Women is the last film directed by the legendary John Ford. Best known for his American westerns, Ford attempted an ambitious stretch for his final production: the story of women missionaries in 1930s China starring Anne Bancroft, Margaret Leighton and Sue Lyon. Elmer Bernstein's haunting score features galloping passages (sounding akin to a "Chinese western") but also intelligent and supple scoring of the conflicting emotions of the women, with saxophone, harpsichord and flute elegantly spotlighted.

This CD features the premiere releases of the complete underscores for Never So Few and 7 Women, remixed in stereo from the original three-track masters.