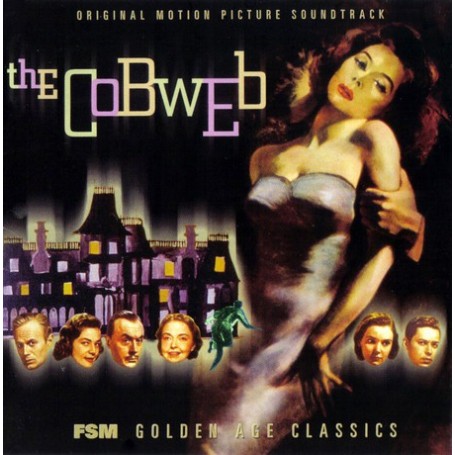 THE COBWEB / EDGE OF THE CITY

Leonard Rosenman has scored dozens of films and TV programs such as Fantastic Voyage (FSMCD Vol. 1, No. 3), A Man Called Horse, The Lord of the Rings, Star Trek IV: The Voyage Home and Combat! With so many productions bearing his sound, it is easy to forget how shocking he truly was when he made his debut. When Rosenman scored East of Eden and A Rebel Without a Cause in 1955 (he had been James Dean's piano teacher and close friend), he introduced a New York concert hall aesthetic that had never been heard in Hollywood.

This CD presents two M-G-M scores from Rosenman's early years. The Cobweb (1955) was Rosenman's second assignment and the first serial score written for film, in which he famously used the twelve-tone technique of one of his teachers, Arnold Schoenberg. Rosenman's avant garde writing accompanies a Vincent Minnelli/John Houseman film about a mental institution—not a horror film, but a character drama where the problems of the patients are dwarfed by those of the staff. Rosenman's symphonic score evokes the inner neuroses of the characters with chamber-like colors and atonal counterpoint.

Edge of the City (1957) was a black-and-white film directed by Martin Ritt, based on a television play exploring corruption on the docks of New York City. John Cassavetes plays an army deserter who must learn that "a man stands ten feet tall" (the television title) when he stands up to a corrupt boss to avenge his friend (Sidney Poitier). Rosenman's brief score features a thrilling, march-like main title in addition to his trademark atonal writing.

The Cobweb and Edge of the City were previously released on a monaural M-G-M Records LP. This premiere CD features the same 14:33 presentation of Edge of the City, reconstructed from the 17.5mm scoring masters and 1/4" album master (the film's master tapes are in mono), and the complete 36:41 score to The Cobweb, remixed in stereo. Edge of the City is presented first, as it was on the LP.

Edge of the City