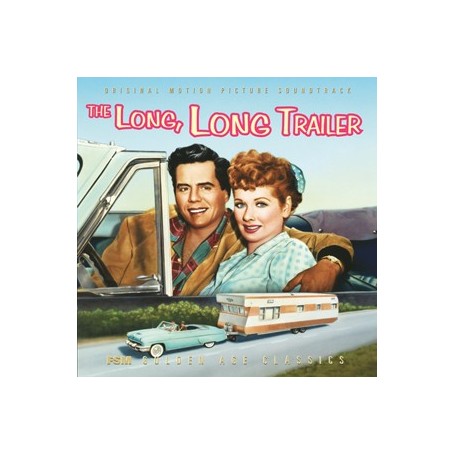 Lucille Ball and Desi Arnaz were two of the world's most famous celebrities in the 1950s, having parlayed their respective talents in movies and music into the groundbreaking TV sitcom, I Love Lucy. With the world their oyster, Lucy and Desi returned to the big screen (where success had somewhat eluded Lucy) with two romantic comedies: The Long, Long Trailer (1954) and Forever, Darling (1956), featuring charming scores by Adolph Deutsch and Bronislau Kaper, respectively.

The Long, Long Trailer was a delightful road picture in which Lucy and Desi (in variations on their television characters) star as a newlywed couple who try to live out of a trailer—with disastrous results. The film was directed by Vincente Minnelli and features first-class slapstick as well as fine characterizations and location photography. It became a moneymaker for M-G-M as well as a comedy classic.

No soundtrack albums were released to these films, despite fine orchestral scores and vocal contributions by the stars. The Long, Long Trailer features a short, classy score by British composer Adolph Deutsch based on the pre-existing song, "Breezin' Along With the Breeze," which Lucy and Desi sing during a happy moment. The complete stereo score is included as well as the Lucy and Desi song (also presented in an unused orchestration) and Desi's vocals for a comedy sequence in which he sings a kind of faux-Italian opera.

Bronislau Kaper scored Forever, Darling during a "fairy tale" period in which he also scored The Swan and The Glass Slipper. He provided the irresistibly catchy title song (with lyrics by Sammy Cahn), sung in the film by The Ames Brothers as well as by Desi Arnaz, and magical, impressionistic scoring for the angel's appearances. Almost all of the monaural score is included (some minor cues had to be omitted due to deterioration), including outtakes. As a bonus, this CD includes the 45rpm single Desi Arnaz recorded with his orchestra of "Forever, Darling" (backed by "The Straw Hat Song") and released on MGM Records.

This CD will be a delight for Desi and Lucy fans, as well as Golden Age aficionados who rarely get a chance to hear this kind of suave comedy scoring. Liner notes are by Lukas Kendall.