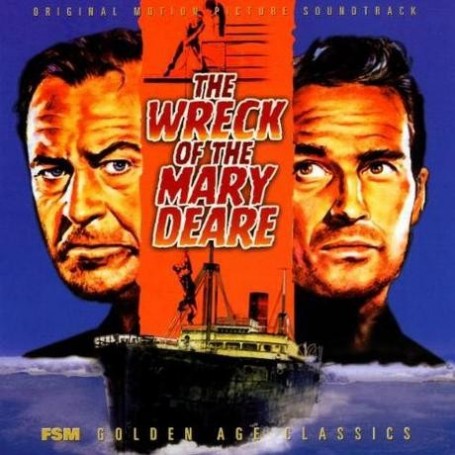 THE WRECK OF THE MARY DEARE / TWILIGHT OF HONOR

The Wreck of the Mary Deare (1959) combined courtroom drama with contemporary maritime adventure as it untangled the mystery of a freighter, the Mary Deare, found drifting in the English Channel. Gary Cooper and Charlton Heston team up as the freighter’s former first officer and a would-be salvage man, with Richard Harris a villainous saboteur.

Longtime Columbia Pictures composer George Duning ventured to M-G-M to score Mary Deare likely due to the film’s producer, Julian Blaustein. Duning provided an excellent score seemingly inspired by the mysterious hulk of the ship itself, with a churning, nautical bass figure giving way to a lovely main theme that achieves a surprising degree of warmth and hopefulness. Adding a modern color is a Novachord synthesizer, suggesting a sonar ping for the seafaring scenes, and foreshadowing the moods of 1960s television adventures such as Star Trek and the shows of Irwin Allen (some of which Duning scored).

Twilight of Honor (1963) was M-G-M’s attempt to make a feature film star out of Richard Chamberlain, TV’s Dr. Kildare. Chamberlain plays a young attorney given the hopeless task of defending the murderer of a popular businessman in contemporary New Mexico; he diligently uncovers a seedy underbelly of sex and infidelity to the case in order to exonerate his client. Claude Rains, Joey Heatherton, Joan Blackman and James Gregory play supporting roles.

Twilight of Honor was the rare straight dramatic score by Johnny Green (billed here as “John”) in the latter stage of his career, which otherwise comprised musical direction and conducting. Green was M-G-M’s former head of music (1949-1958) who wrote one of the greatest scores of the Golden Age in Raintree Country (FSMCD Vol. 9, No. 19) and penned many standards as a songwriter. Green wrote an unusual, propulsive main title for Twilight of Honor that sounds like the wheels of justice rolling over everything in sight; the entire score is written for brass, woodwinds and percussion (no strings) and also features a tender love theme, delightful “Southern gothic” moods and jazzy source cues. The complete score is presented here; an LP featured only four cuts along with miscellaneous selections from the MGM Records catalog.

Both The Wreck of the Mary Deare and Twilight of Honor are presented in complete form, newly mixed in stereo from the original 35mm three-track scoring sessions. Liner notes are by Lukas Kendall.

The Wreck of the Mary Deare