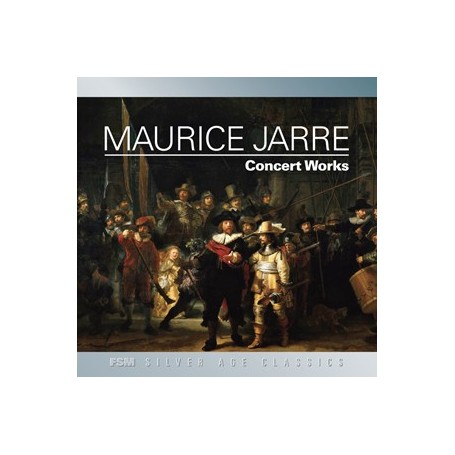 FSM kicks off its 12th year of “Classics” releases with a CD of rare Maurice Jarre concert works from the French national archives.

Maurice Jarre’s career is commonly thought to begin with The Longest Day and Lawrence of Arabia in 1962, which propelled him to international stardom. But as early as 1951 he had a flourishing career in his native France that encompassed film, radio, theater, record albums and concert works for over a decade. Five such classical works are presented on this CD (although one of the performances dates from 1974).

“Three Dances for Ondes Martenot and Drums” (1951) was written for a ballet that was never choreographed, although the score was performed in concert. It is scored for the ondes Martenot (an early electronic instrument which Jarre used in several film scores) and percussion.

“Passacaglia to the Memory of Arthur Honegger” (1957) is a symphonic work which Jarre wrote in tribute to his mentor, French composer Arthur Honegger. It utilizes the challenging form of the passacaglia, marked by a persistently sustaining musical figure (or ostinato) in the bass.

“The Night Watch” (1961) is the most cinematic piece on the album, inspired by a Rembrandt painting (hence the cover of the CD). It is an exciting, pulsating work foreshadowing Jarre’s film music, particularlyLawrence of Arabia, with what sounds like a forerunner to the Arab theme.

The lengthy (32-minute) “Mobiles for Violin and Orchestra” (1961) is a modern, abstract piece in which the violin soloist (here, Devy Erlih) is responsible for choosing some of the order of the violin music, in relationship to a “fixed” orchestral accompaniment. (The liner notes explain the work’s conceptual backing in detail.)

Finally, “Ancient Suite for Percussion Instruments and Piano” (composed in 1956, recorded in 1974) is a “competition work” spotlighting several percussion instruments in five movements. Jarre was himself a percussionist and writes for percussion with great skill.

Maurice Jarre: Concert Works has been produced by Jacques Hiver and Lukas Kendall from recordings maintained by the Institut National de l’Audiovisuel (INA), a division of the French government which archives the country’s public radio and television broadcasts. The entire CD is in monaural sound and has been newly mastered from the original tapes—or, in the case of the 1951 “Three Dances,” acetates.

Liner notes explain all of the works in detail, including new interview comments by the composer. This important release is limited to 1,500 copies.