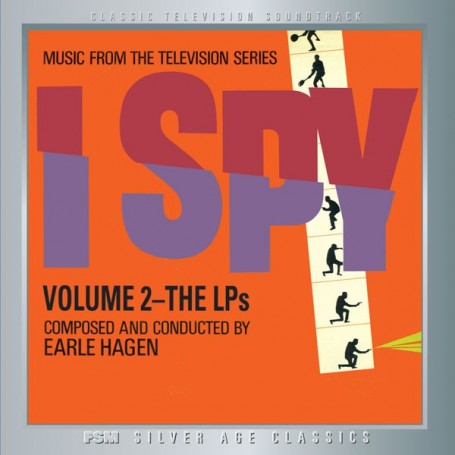 I Spy—one of the most popular action-adventure television series of all time—ran only three seasons (1965-68); nevertheless, the show spawned not one, but two “soundtrack” LPs, both of which have long been highly sought-after collector’s items. FSM’s first volume of Earle Hagen’s music from the series used the original television recordings because only one of the discs was available to license at that time. Happily, the situation has changed.
I SPY, Vol. 2—The LPs brings together both the Warner Bros. album released in early 1966 and the Capitol Records disc issued in late 1967 (both remastered from the original ¼” stereo tapes). The result is truly a “best of” I Spy, incorporating music from each of the show’s three seasons. Although both albums were re-recordings, Hagen employed many of the same session musicians he hired on a weekly basis for the show, and some of the arrangements are quite close to the originals heard on the series soundtrack.

I Spy starred Robert Culp and Bill Cosby as undercover agents whose work took them all over the world (the show’s location photography and the interplay between the leading characters were two of its many strengths). This gave composer Hagen the opportunity to write music in a vast array of (meticulously researched) ethnic styles, from south of the border to the European continent and all the way to the Far East.

This variety is reflected on these LP tracks, where Hagen extends his essentially big band palette to include the colors of Mexico, Japan, Greece, Italy, Hong Kong and the U.S.A. From lyrical, blues-flavored melodies to rhythmically-driven action cues, Hagen (along with colleague Hugo Friedhofer—who composed three of the tracks on this CD) captures all the excitement and drama of this Emmy award-winning series.

FSM designer Joe Sikoryak incorporates numerous series stills, original album art (and liner notes), sheet music, composer photos and a gallery of heroes and villains from the show in an eye-catching 16-page booklet. Notes are by television music historian Jon Burlingame, who brings special authority to the subject—he conducted the five-hour video interview with Hagen for the Archive of American Television. In addition, a personal letter from Hagen about the albums is posted on the FSM online notes site.

I Spy is a musical adventure like no other—savvy, sophisticated and smart. No wonder Bill Cosby repeatedly used the word “hip” in his liner notes for the second album. Now, after years of waiting, fans can listen and hear for themselves.