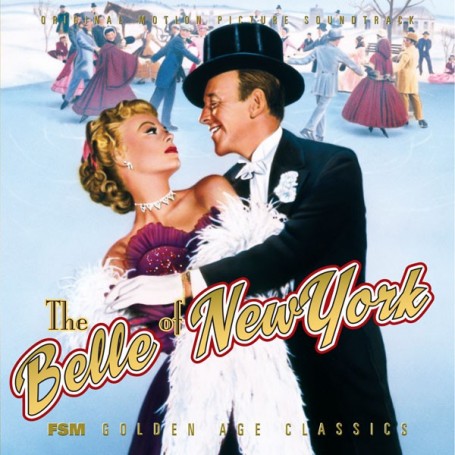 THE BELLE OF NEW YORK

For its first “all-singing, all-dancing” disc, FSM presents an underappreciated musical gem from the celebrated “Freed Unit” at M-G-M: The Belle of New York. Producer Arthur Freed was responsible for some of the most popular and successful musicals of all time, including Meet Me in St. Louis, The Harvey Girls and—most famous of all—Singin’ in the Rain.
On the day that production began for Singin’, cameras also started to roll on The Belle of New York, a vehicle for Fred Astaire and Vera-Ellen (with Alice Pearce, Marjorie Main and Keenan Wynn also in the cast).  Featuring songs by Harry Warren and Johnny Mercer—a team which, together and separately, was responsible for numerous pages in the Great American Songbook—Belle was light on plot but filled with great tunes, clever lyrics and eye-pleasing dance numbers.

Although the marvelous Warren–Mercer songs are front and center, the film also includes a few instrumental themes by Adolph Deutsch and Conrad Salinger. Deutsch conducted the M-G-M Studio Orchestra and Salinger was the picture’s primary musical arranger, with additional work by Deutsch, Albert Woodbury, Alexander Courage and Maurice DePackh.

This is the premiere CD release of a program that was previously available only as a digital download from Turner Classic Movies Music/Rhino Movie Music. It features all the musical numbers and a generous amount of underscore, mastered from a variety of high-quality first-generation sources. Previous LP and CD versions have been far less comprehensive in their presentation of the score.

CD producer George Feltenstein anchors the 24-page booklet with an essay on the production which reflects both his intimate knowledge of studio history and his infectious enthusiasm for the genre. Frank K. DeWald’s track-by-track commentary sets each song and underscore cue in context. Designer Joe Sikoryak fleshes out the text with colorful film stills, promotional materials and behind-the-scenes photos.

Overshadowed by Singin’, The Belle of New York was nonetheless a cornucopia of talent and professionalism that still delights today with its beautiful score and charming visuals.

The Belle of New York