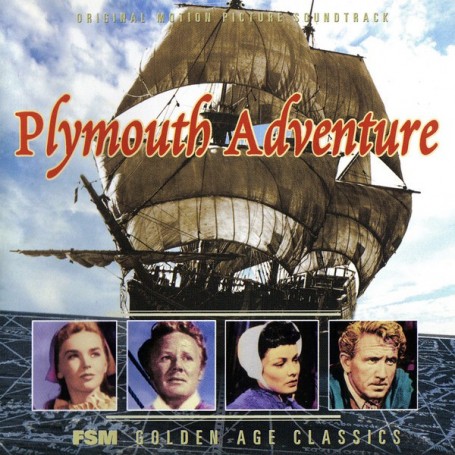 M-G-M's 1952 Plymouth Adventure was a sincere attempt to tell a vital piece of American history: the 1620 voyage of the Mayflower. Spencer Tracy stars as the ship's crusty Captain Jones, surrounded by a game cast including Gene Tierney, Van Johnson, Lloyd Bridges, Barry Jones, Dawn Addams, Noel Drayton and John Dehner. Producer Dore Schary aspired for historical accuracy and sought to redress misconceptions about the Pilgrims even as he concocted a colorful piece of Hollywood entertainment. The film has become a staple of Thanksgiving television broadcasts, and its production design (including a full-size Mayflower) and Academy Award-winning special effects still impress.

Composer Miklós Rózsa researched period music for his score and used for his main theme a Psalm setting which the Pilgrims would have known (Psalm 136). He composed the remainder of his themes "in the manner of the 17th Century lutenist composers" (in his words), although not to the point where it would interfere with the drama. Composed at the beginning of his "historical" cycle (which kicked off with Quo Vadis? and Ivanhoe), Plymouth Adventure is a magnificent Rozsa effort capturing the spirit and travails of the Puritan Separatists, with numerous melodies for the various characters. His thrusting cue for the Mayflower leaving harbor ("The Mayflower") is a virtual template for ships sailing forth, emulated in everything from Mutiny on the Bounty to Star Trek.

FSM's premiere CD release of Plymouth Adventure features the complete score as heard in the film plus additional material: Rózsa recorded his score in seven sessions over six weeks (to match changing versions of the film), and alternate versions of many important cues are also included. Although originally recorded in stereo, the film's master tapes were long ago transferred to 1/4" tape and the music is thus presented in the best possible monaural sound.