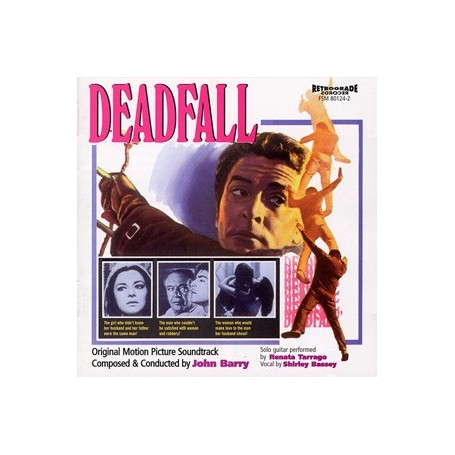 Deadfall is a little known British film which John Barry scored between You Only Live Twice and On Her Majesty's Secret Service, two of his best James Bond scores. It was directed by Bryan Forbes, with whom Barry had an ongoing relationship, and starred Michael Caine as a jewel thief mixed up with a weird, incestuous couple. The movie is fairly obscure, but the score is a lost Barry treasure, unavailable since the original Fox LP was released in 1968.

The score is best described as a tense, romantic effort, like a '60s Bond/spy score crossed with Body Heat. The title song was performed by Shirley Bassey ("Goldfinger," "Diamonds Are Forever"), and we've unearthed two never-before-heard demo versions which Barry had arranged—one is a male vocal, featuring a singer since identified as Malcolm Roberts, and the other is an instrumental with a cool Thunderball-style opening.

The highlight of the CD is the 14-minute guitar concerto, Romance for Guitar and Orchestra. This is Barry's only long-form concert work to date, and was featured in the best segment of the film: while Caine loots a safe in a mansion, the occupants attend a concert of music by—John Barry (like with Herrmann in The Man Who Knew Too Much). He conducts this piece on screen, and it functions both as a concert work and as an underscore for the robbery going on elsewhere.

We lucked out on this one because the sound quality is terrific—other Fox Records masters of this era are terrible but Deadfall survived the ages with crystal clarity. The CD is in stereo except for the last two demo tracks, which were only available in mono. The 16-booklet features new liner notes by Jon Burlingame, who interviewed Barry anew for it, as well as photos from the movie and of Barry then and now.