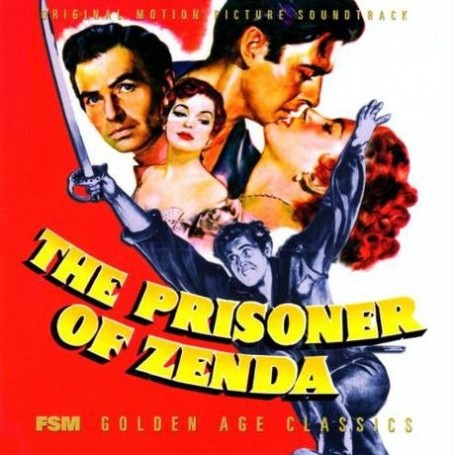 THE PRISONER OF ZENDA

Anthony Hope's 1894 swashbuckling novel The Prisoner of Zenda was a romantic adventure about a commoner called on to impersonate a king. A popular sensation, it has been adapted for no less than eight film and television productions, from the silent era to present day, the most famous being a 1937 swashbuckler produced by David O. Selznick and starring Ronald Colman, a classic of the genre.

In 1952, M-G-M bought the Selznick's picture remake rights for its star Stewart Granger (King Solomon's Mines, Scaramouche), who had instigated the project after chancing upon a screening of the earlier film. Granger proposed a "scene-by-scene" remake to offset the costs of Selznick's fee. Directed by the studio's Richard Thorpe and co-starring Deborah Kerr, Louis Calhern, James Mason and Jane Greer, the 1952 picture (in color) featured fine M-G-M production values and was well received and reviewed, if not regarded as highly as the '37 version.

The 1937 Selznick film had been scored by Alfred Newman, then music director for Samuel Goldwyn, who would soon compose such legendary efforts as Gunga Din and The Hunchback of Notre Dame. Newman provided a bounty of themes in the Wagnerian "leitmotif" tradition, with memorable signatures for the film's hero, villain and love interests, and a noble hymn for the mythical country of Ruritania. The score is a classic "swashbuckling" effort encompassing the dignity of European royalty and the action-adventure of the film's conflicts and climactic duel (the latter written by Hugo Friedhofer).

As part of the concept of replicating the earlier film, Alfred Newman's score was reused for the 1952 version, adapted by M-G-M's legendary composer/arranger Conrad Salinger and conducted by Johnny Green. Salinger, who worked on the finest musicals of Hollywood's Golden Age, faithfully applied Newman's score to the new film. The complete recording for the 1952 version (master tapes do not survive for Newman's 1937 recording) is presented on this CD, in the best possible monaural sound (stereo masters no longer exist).

The Prisoner of Zenda