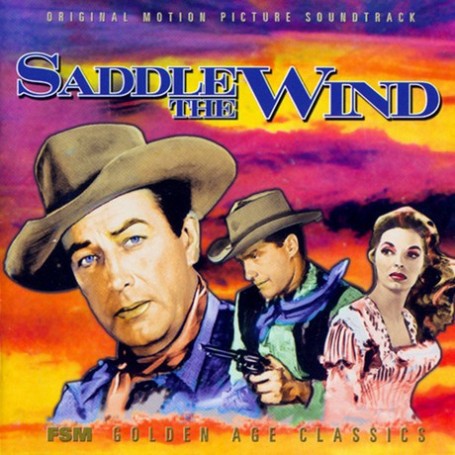 Saddle the Wind (1958) was a psychological western demonstrating the effect of television on the long-established western genre, with a screenplay by no less than Rod Serling (The Twilight Zone). Robert Taylor starred as an ex-gunfighter-turned-rancher whose younger brother (John Cassavetes) threatens the peace with his thirst for violence. Under Serling's thoughtful writing, typical western tropes are subverted as brother must fight brother, with a surprising result.

The score to Saddle the Wind was by Elmer Bernstein—two years away from his most famous western work, The Magnificent Seven. Bernstein's score is in keeping with the film's "anti-western" style, providing a somber and pensive mood, but not without exciting flourishes and "big sky" moments. Bernstein provides his own melodies for the characters, in addition to utilizing the title song, which was composed by the songwriting team of Jay Livingston and Ray Evans ("Bonanza") and sung over the main title by Julie London (who plays the love interest in the film).

Bernstein was not the first composer to score Saddle the Wind—a fact unknown to him until production of this album. M-G-M's Jeff Alexander was the original composer and recorded a score in its entirety; the film was subsequently recut so extensively as to require new music. (This is presumably the reason for the change of composer—the actual fact is lost to time.) Alexander's score is similar to Bernstein's in its emphasis on mood with sudden orchestral violence, with its own set of themes.

This CD features both Bernstein's and Alexander's complete scores in the best-possible monaural sound, as they were recorded. The title song, "Saddle the Wind," is presented in stereo in its original arrangement by Andre Previn, never before heard. (The film utilizes the Liberty Records version which is not included here for licensing reasons, although it has been released on various Julie London albums.) Liner notes by Jeff Bond and Lukas Kendall explain the differences between the scores as much as possible.

*not version contained in film