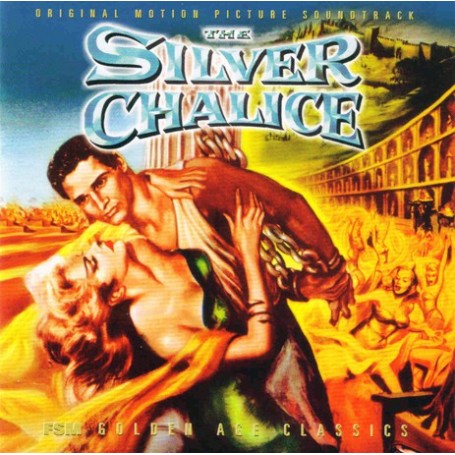 A great biblical epic score of the 1950s comes to CD at last: The Silver Chalice (1954) by Franz Waxman.

The early CinemaScope era was replete with biblical epics designed to appeal to 1950s audiences with religious subject matter and colorful widescreen cinematography. The Silver Chalice was unusual in that director Victor Saville opted for an interior, moody approach utilizing spare, almost abstract Art Deco sets rather than the customary panoramas of the genre. The film stars Paul Newman (in his feature debut) as a silversmith enlisted by the early Christians to design a Silver Chalice to house their Holy Grail, the Cup of Christ. Virginia Mayo, Jack Palance, Joseph Wiseman, Pier Angeli, Lorne Greene and Alexander Scourby co-star as Newman is swept into the political intrigue of ancient Rome as well as a romantic triangle with Mayo and Angeli.

The magnificent score by Franz Waxman is familiar to collectors from Elmer Bernstein's re-recording in the 1970s (available from FSM in Bernstein's Film Music Collection box set). This marks the first-ever release of the original soundtrack recording. Waxman drew upon the work of great liturgical masters like J.S. Bach from the Baroque era in order to depict the power of the Cup and the influence of Christ—a highly learned achievement that was praised by musicologists and resulted in the Library of Congress requesting Waxman's original sketches for archiving (one of the few times they have done this).

In addition to the powerful religious music, Waxman wrote a beautiful, yearning love theme for Pier Angeli (the "good" character in the love triangle); solemn, reverent material for the Christian leaders; mysterious and evocative music for the story's pagan villain (Palance); and memorable and picturesque music for the film's depiction of ancient Rome. In keeping with Saville's take on the story, there are relatively few sweeping moments of outdoor grandeur; rather, Waxman's score is a thoughtful, "interior" achievement tied to character and emotion. However, there is at least one lengthy action sequence where Waxman uses the complex form of the fugue, elevating the film music requirements with this highly challenging musical approach.

Over 50 years after its recording, Waxman's great score to The Silver Chalice comes to CD in the best-possible monaural sound (the stereo masters are long lost), complete except for one unused cue and a few otherwise unavailable selections taken from a music-and-effects reel (the only possible source). The 2CD program includes a good deal of never-before-heard music, both for deleted scenes (described in the program commentary) and "pre-recordings" (temporary cues recorded prior to production). It is the definitive presentation of this classic score. Liner notes are by Lukas Kendall.