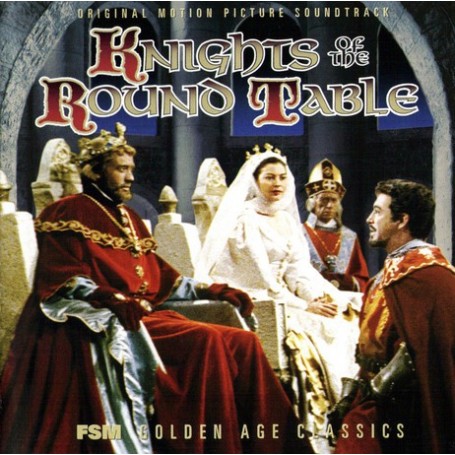 KNIGHTS OF THE ROUND TABLE / THE KING'S THIEF

This 2CD set features two Miklós Rózsa scores for chivalrous knights and dashing swordsmen: Knights of the Round Table and The King's Thief.

Knights of the Round Table (1953) was M-G-M's first CinemaScope production, a colorful telling of the Arthur-Guinevere-Lancelot love triangle that has since been filmed as Excalibur (1981) and First Knight (1995). Robert Taylor, fresh from the studio's hit Ivanhoe, was cast as Lancelot, opposite Ava Gardner as Guinevere, and Miklós Rózsa was likewise recalled to the genre for one of his legendary action-adventure outings. Rózsa provided a complex score for large orchestra, with bountiful themes for knights and ladies, and extended action cues for sprawling battles.

A previous release of Knights on a Varese Sarabande LP and CD was an English recording (conducted by Muir Matheson) that was at one time intended for the film. FSM's CD features the premiere release of the original film soundtrack as conducted by Miklós Rózsa (and to a lesser extent John Green) in Los Angeles.

The King's Thief (1955) was a late attempt at the swashbuckling genre, with Edmund Purdom as an outlaw thief (with noble intentions) and a young Roger Moore as his right-hand man. Rózsa rose to the occasion with a majestic main theme and rollicking action cues, as well as romance for the love interest. Suspense figures prominently in an 18-minute prison escape sequence.