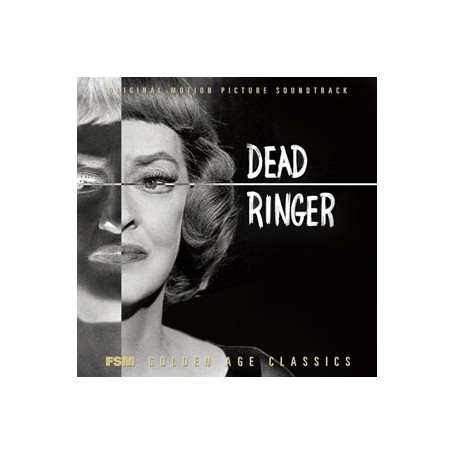 Dead Ringer (1964) is one of the most delightful scores in the career of legendary composer, conductor and pianist André Previn. A macabre tale of identical twins (Bette Davis)—one of whom kills the other and assumes her identity—the film was given a gloriously over-the-top score by Previn, with notable use of harpsichord for sinister effect.

The early 1960s were a time of transition for Previn. A wunderkind prodigy at M-G-M in the 1950s, he won widespread acclaim for his stellar music direction on musicals such as Gigi (1958) and Porgy and Bess (1959). As the '60s arrived, he composed some of his finest dramatic scores, such as Elmer Gantry (1960) and Four Horsemen of the Apocalypse (1962). In only a few years he would quit film altogether, but in 1963-1964 he was employed at Warner Bros. on the music direction for My Fair Lady (1964) and—while that film was shooting—the underscore for Dead Ringer.

Dead Ringer was a followup of sorts to Bette Davis's comeback hit What Ever Happened to Baby Jane? (1962), in which Davis had starred opposite Joan Crawford. Based on a project that had originated in the 1940s, Dead Ringer gave Davis dual roles as the "good" and "bad" sister in a pair of identical twins—but in this case, it is the "good" twin who finds herself going down a path of corruption and tragedy.

From this relatively straightforward premise, Andre Previn hit an absolute home run with his score. Two major themes are present: a jagged, modernistic melody spotlighting strings and harpsichord, used for the determination of the "good" twin to take over her sister's life; and a wonderful homage to Erich Wolfgang Korngold (who scored several of Bette Davis's most famous pictures) in a soaring love theme with uniquely Previn touches.

If anything, Dead Ringer features the same sense of gleeful showmanship and symphonic wizardry (and specifically harpsichord) that is found in John Williams's score for Alfred Hitchcock's Family Plot. Both scores seem to live by Hitchcock's reported saying to Williams (and others): murder can be fun.

This CD features the premiere release of the complete Dead Ringer score. Tracks 1-13 feature the Warner Bros. Records LP program in excellent stereo sound (remixed from the original three-track 1/2" album master), while tracks 14-21 feature the balance of the score (and source cues) in monaural sound (the previously unreleased music survives only in mono). Liner notes are by Jeff Eldridge.