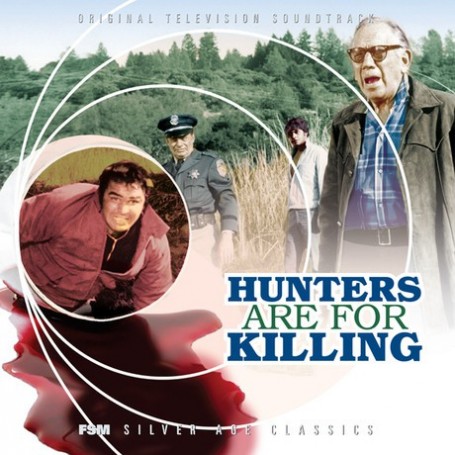 HUNTERS ARE FOR KILLING

Jerry Fielding carved out a special niche for himself in the 1970s, scoring numerous films with strong, masculine protagonists fighting both inner and outer demons. His intensely personal and idiosyncratic style—informed by concert-hall modernism as well as his own jazz background—was a perfect musical foil for films by Sam Peckinpah (The Wild Bunch, Straw Dogs), Michael Winner (Lawman, The Mechanic) and Clint Eastwood (The Outlaw Josey Wales).

Leading off that series of iconic scores, however, was Fielding’s little-known music for a telefilm which debuted on CBS on March 12, 1970. Starring Burt Reynolds, Suzanne Pleshette and Melvyn Douglas, Hunters Are for Killing mixed elements of film noir (an ex-con revisiting his past and unjustly accused of murder) with more standard dramatic entanglements.

Fielding’s score practically gushes with imagination: it integrates lush romantic strings (a throwback to his sunnier 1960s scores like Advise & Consent), a plaintive “Americana” theme voiced by solo accordion, delightful source cues, and even his own trademark “laughing trombones” (which many fans will recognize from Star Trek’s “The Trouble with Tribbles”). The uptempo main theme is the same mixed-meter jazz piece that he used as the theme to Matt Helm (1975 telefilm) and The Big Sleep (1978). Virtually unknown, Hunters Are for Killing is a terrific Fielding score that will thrill his fans.

This premiere CD of the complete Hunters Are for Killing soundtrack is newly remastered from monaural dub-downs stored at UCLA in their holdings of the CBS music library. The booklet, designed by Joe Sikoryak, features both an appreciative and insightful essay on Fielding’s unique contribution to film music and a track-by-track analysis of the score by Lukas Kendall.