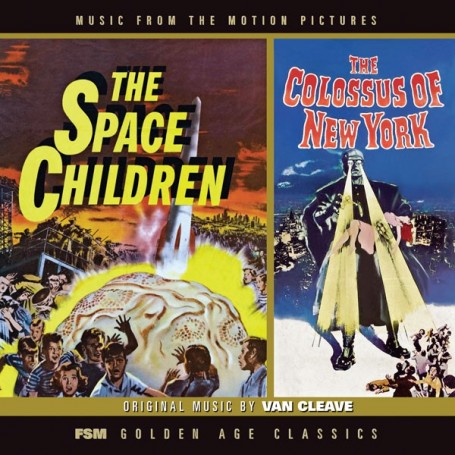 THE SPACE CHILDREN / THE COLOSSUS OF NEW YORK

The two films on this FSM “double feature” arrived near the end of the first Golden Age of cinematic science fiction, launched in 1951 with The Thing From Another World and The Day the Earth Stood Still. By the time William Alland produced The Space Children and The Colossus of New York in 1958, box office was down and budgets where correspondingly smaller.
Creativity and imagination are priceless, however, and composer Van Cleave scored both of these films with the same affinity for the genre he had shown in The Conquest of Space (1955) and would demonstrate again in Robinson Crusoe on Mars (1964) and Project X (1968).

What The Space Children lacked in production values it compensated for with a thought-provoking storyline about children saving the world from the brink of nuclear annihilation at the behest of a benign alien being. Van Cleave’s eerie but economical score (for an ensemble of 15 instruments, including electric violin and 3 organs—including a Novachord) evokes the alien’s other-worldly presence throughout the film.

Loosely based on the legend of the Golem, The Colossus of New York starred Ross Martin as a brilliant scientist whose brain is encased in a Frankenstein-like mechanical body after his death, with tragic results for himself and his family. Van Cleave (who received invaluable assistance on the score from the late Fred Steiner) complimented the film’s black-and-white photography with—almost literally—a “black-and-white” score for three keyboard players. Avoiding the emotional expressiveness of strings and other instruments for the more limited colors of piano (augmented by organ and celesta) led Van Cleave to create one of the most strikingly original science fiction scores ever written.

The relative obscurity of both films has kept these two fascinating scores largely under wraps—until now. With this release, fans can appreciate—for the first time—Van Cleave’s scores for The Space Children and The Colossus of New York in their entirety. FSM has remastered the music for both movies from surviving 35mm three-track stereo music masters, supplemented by cues from the films’ monaural music stems (with a light stereo ambience added to enhance listenability). The 20-page booklet includes an informative essay by Jeff Bond and numerous film stills in stunning black-and-white.

The Colossus of New York