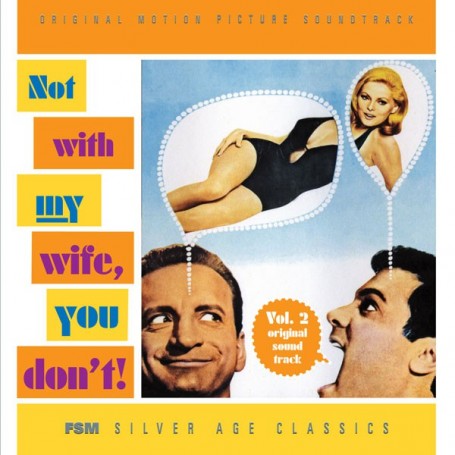 NOT WITH MY WIFE, YOU DON'T Volume 2

Not With My Wife, You Don’t! (1966) was one of a series of sex comedies John Williams scored in the mid ’60s (during his “Johnny” period). A delightful screwball comedy starring George C. Scott and Tony Curtis as rivals for the affection of Italian beauty Virna Lisi, the film was produced and directed by Norman Frank (whose previous credits included Danny Kaye’s The Court Jester and two Bob Hope “Road” films). Co-author Larry Gelbart brought to the screenplay the same mordant wit he would later display in Tootsie and M*A*S*H, and the unlikely pairing of Scott and Curtis generated surprising comedic chemistry.
As was common with Williams’s projects of the period, the score is bursting with catchy tunes. Much of the music is based on two of the three songs he composed for the film with legendary songwriter Johnny Mercer. “Big Beautiful Ball” is a bouncy jazz waltz, and “My Inamorata” is used extensively throughout the score as a love theme. Elsewhere, the music demonstrates the same deft comic touch (encompassing patriotic parody, ethnic strains, and even an operatic spoof) that served the composer so well in Home Alone and countless other films.

FSM reissued the LP re-recording of Not With My Wife, You Don’t! in March 2006. The album program offered a unique and delightful listening experience in its own right, but this CD offers the premiere release of the nearly-complete original film tracks, derived from the original ½″ three-track scoring masters.

Numerous film stills decorate the 16-page booklet, surrounding an essay on film and score by FSM’s “resident Williams authority,” Jeff Eldridge. Not With My Wife, You Don’t! overflows with wit and the contemporary sensibility of film-scoring’s most celebrated maestro. Even fans with Vol. 1 already in their collection will need to buy this sequel because, like Virna Lisi’s character in the film, they will want “two of everything.” One can never have too much John Williams.

Not With My Wife, You Don't!, Vol. 2—Original Soundtrack