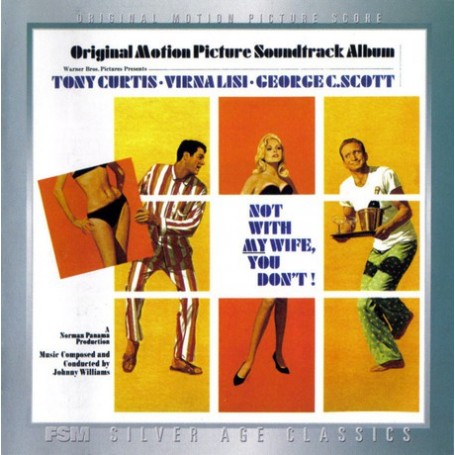 NOT WITH MY WIFE, YOU DON'T / ANY WEDNESDAY

This doubleheader CD presents digital premieres of two swinging sex comedy scores from 1966: Not With My Wife, You Don't! and Any Wednesday , as re-recorded for Warner Bros. Records.

Not With My Wife, You Don't! starred Tony Curtis, George C. Scott and Virna Lisi in a wacky love triangle involving two servicemen and an Italian beauty. The score by John "Johnny" Williams was one of several he composed for adult-oriented "screwball" comedies in the 1960s, three of them already released by FSM: John Goldfarb, Please Come Home!, Penelope and A Guide for the Married Man.

Williams's work on Not With My Wife, You Don't! is noteworthy for his collaboration with legendary lyricist and performer Johnny Mercer, with whom he wrote three songs: the upbeat "Big Beautiful Ball," romantic "My Inamorata," and goofball-pop "Not With My Wife, You Don't." The album, as was the custom for the day, features vocal and instrumental versions of the songs, selected score cues, and expanded versions of source music.

Although he was many years away from his worldwide fame, Williams's gifts for composition and cinema were more than evident on "light" fare such as this; his score is tuneful, diverse and imaginative in its symphonic and dance-band orchestrations.

Any Wednesday was based on a Broadway hit and starred Jane Fonda as a ditzy, heartsick mistress to an industrial tycoon played by Jason Robards. The score—very much of a piece with Not With My Wife, You Don't!—was composed by George Duning, an underrated composer with a gift for melody who was a contract composer at Columbia Pictures in the late 1950s (when Williams was the studio orchestra pianist).

This bargain doubleheader is long overdue for John Williams collectors, a rare release for aficionados of George Duning, and a charming delight for fans of the Henry Mancini/Neal Hefti school of "swinging sixties" comedy. The albums have been remixed and remastered from the 1/2" four-track masters for superb stereo sound quality.

Not With My Wife, You Don't!