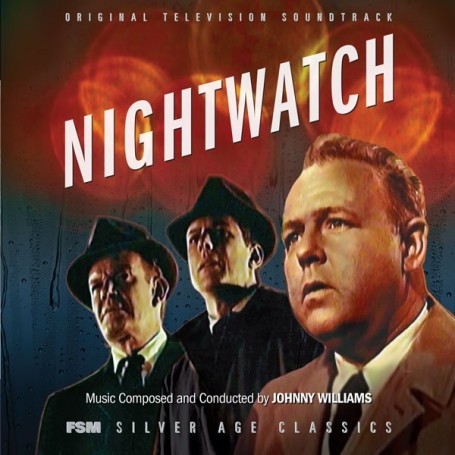 This FSM CD presents the premiere release of two scores for CBS telefilms, both made as pilots for series that never materialized, composed by two well-known and influential Hollywood giants.
Composer John Williams and director Robert Altman famously collaborated on two feature films: Images (1972) and The Long Goodbye (1973). But their personal and professional relationship had begun in television nearly a decade earlier, on Revue's Kraft Mystery Theatre and Kraft Suspense Theatre. Altman's final Kraft Suspense episode had been "Once Upon a Savage Night" (later released theatrically as Nightmare in Chicago), shot on location around the Windy City using a special film stock that permitted nighttime filming with available light. After forming his own production company, Altman pitched a pilot for another series to be shot at night on location near the Great Lakes, at first dubbed Chicago, Chicago, but later retitled Nightwatch.

John Williams scored the Nightwatch pilot ("The Suitcase") in late 1965 and early 1966, creating a dynamic main theme and a suspenseful episode score. When CBS passed on the show, it remained unseen until Jul 15, 1968, when the network aired it on an anthology of busted pilots under the title "A Walk in the Night."

Shortly after serving as musical director for the Oscar telecast in April 1971, Quincy Jones began work on The City by Night, starring Robert Wagner and Greg Morris as a Los Angeles doctor and cop, respectively, who must track down a murderous diphtheria victim wreaking havoc in the city. The film (with a last-minute name change to Killer by Night), aired on the January 7, 1972, installment of The New CBS Friday Night Movies, but the network decided not to pick it up for a series.

Jones’s score, heavy on winds and percussion, combines his authoritative jazz sensibility with unique sonorities and compelling rhythms to effectively capture the story’s menace. A reserved but romantic love theme balances out the murky harmonies and harsh dissonance of the score’s darker, more aggressive passages.

FSM has remastered both scores from the only surviving sources: ¼” monaural tapes, given a slight stereo ambience for listenability. (The series theme and format music for Nightwatch are exceptions, presented here in vibrant genuine stereo, remixed by Mike Matessino.) The 20-page booklet designed by Joe Sikoryak contains authoritative notes on both films by Jeff Eldridge, plus track-by-track analyses by Eldridge and Frank K. DeWald.