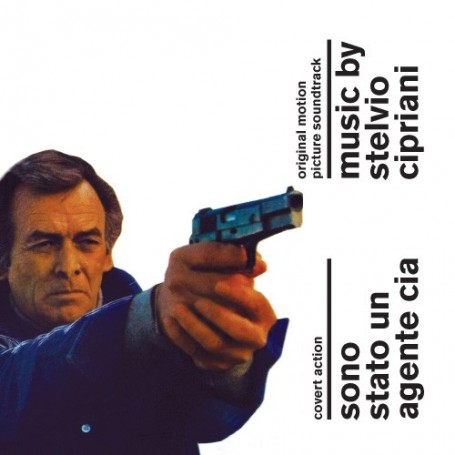 The 1978 Italian espionage thriller SONO STATO UN AGENTE CIA stars well-known 60s / 70s American actor David Janssen – television's original FUGITIVE. Also known as COVERT ACTION the taut narrative is a precursor to the wildly successful Jason Bourne series in that Janssen's character is in Europe fighting to stay alive and one step ahead of his former employers, a dark cabal within the American intelligence community. A major difference between current film fare such as the Bourne productions and COVERT ACTION is to be found in the area of the music, this 1978 release features a score graced with numerous full-form melodies and is an imminently accessible – and fulfilling - listening experience from beginning to end. Stelvio Cipriani rarely disappoints and this effort is certainly no exception to that rule. Being that he was a bit younger than the majority of Italian film music Maestros of the Silver Age Cipriani's powers of artistic expression truly peaked in the 70s, and for this dark and violent story he resourcefully turns every twist of plot and character interaction to an excuse for emphatic designs and skillful instrumentation that cover a broad range of exotic moods and style. Actually it can be said that COVERT ACTION is one of this composer's most variegated works and it will undoubtedly compel many to pine for the unpredictable versatility of the all but lost art of prominently melodic scoring techniques. Chris' Soundtrack Corner elevates the four cuts of the original three-score Beat LP release into an 18 track digital re-mastering of Cipriani's complete work. Liner notes for this collector's edition disc are by retro Euro-cult film score journalist John Bender.