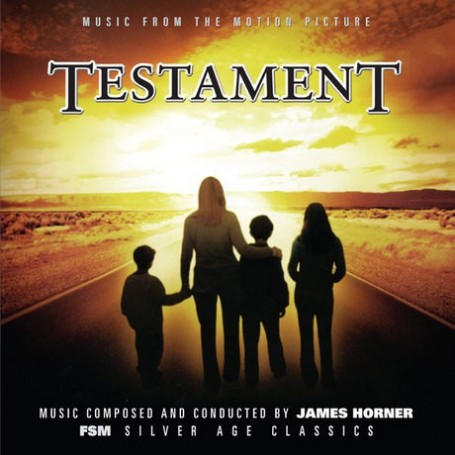 Films about nuclear holocaust and its aftermath are often action-packed spectaculars with over-the-top orchestral scores. Testament (1983) is a modest-budget production that takes an entirely different approach. It focuses on the residents of a small Northern California town as they deal—not with the direct impact of the blast—but with the insidious and deadly effects of radiation poisoning.

Testament stars Academy Award nominee Jane Alexander as a suburban mother who must cope with the loss of her husband, two of her children, and an uncertain future for herself and her surviving son. It is an incredibly moving story about bereavement and grief which has lost none of its expressive power over the years.

James Horner’s music for Testament, composed between his two hugely symphonic Star Trek scores, is a marvel of meaningful minimalism. Horner uses a small ensemble of only 10 players, with much of his score consisting of mere individual lines (solos, duets, trios) that are gut-wrenchingly direct and moving in their simplicity. From the evocative main theme voiced on solo French horn to the heart-breaking lullaby for the youngest son (played by six-year-old Lukas Haas), the score packs tremendous emotional wallop into a musically compact frame.

FSM has sourced the complete score for Testament from the three-track film mixes by Shawn Murphy printed on the score’s 1" 32-track digital 3M master tapes. The score was recorded at Walt Disney Studios’ now-defunct Stage A (rarely used for feature films of the period, due to its small dimensions), while the master tapes were transferred in 2010 by Walt Disney Imagineering, who operate one of the last surviving 3M multitrack digital machines.

Although the score for Testament is short, FSM feels that—given the subject matter and the high emotional content of the music—it would be wrong to pair it with anything else. The 16-page booklet includes the usual background essay and track-by-track analysis (by Scott Bettencourt and Frank K. DeWald), plus numerous film stills.

Testament is a powerful film made more potent by the fresh and simple approach of a promising young composer who was obviously inspired by the film’s story. Listeners can expect to be equally moved by his efforts.