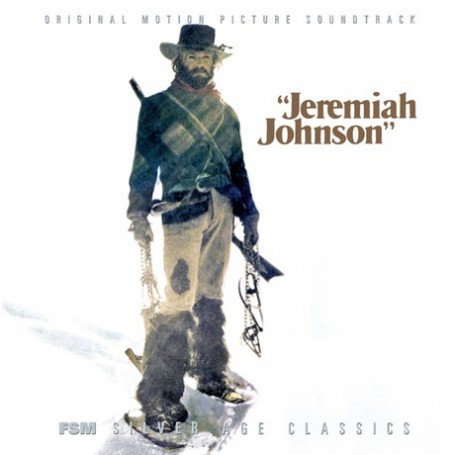 One of the loveliest and most lyrical symphonic scores of the early 1970s comes to CD in deluxe form in Jeremiah Johnson (1972), the Sydney Pollack-directed, John Milius-scripted western starring Robert Redford as a 19th century mountain man. Decades before Dances With Wolves, this adventuresome tale (featuring breathtaking views of the Utah wilderness) told a somewhat different but still existential tale of a white man determined to escape society, who forges his own, often violent relationship with the land and its Native American inhabitants.

The gorgeous, folk-symphonic score to Jeremiah Johnson was composed by a team of musicians largely unknown to soundtrack collectors (except for this effort)—but don’t let that fool you. John Rubinstein (b. 1946) and Tim McIntire (1944-1986) were primarily actors but also musicians with a handful of composing credits; they won the assignment after Rubinstein had a meeting Pollack through his acting agent. Between McIntire’s efforts as a singer-songwriter and Rubinstein’s gifts as a symphonic composer and orchestrator—and their collaborative harmony—they created a lasting piece of Americana centered around several original songs (sung by McIntire) essaying Jeremiah’s story. The symphonic portions, meanwhile, brim with the Milius ethos of heart, humor, strength and love of the land—very much in keeping with the robust orchestral scores Basil Poledouris would later compose for Milius’s films as director and, apart from Milius, the Emmy-winning Lonesome Dove.

Previously available only on LP, the complete score to Jeremiah Johnson has been restored from excellent stereo sources to present a main program generally following the LP but omitting the dialogue that appeared on several tracks (rather like a concept album). A comprehensive bonus section includes those dialogue-laced tracks, plus alternate instrumental cues from the original soundtrack and—thanks to Rubinstein’s foresight in saving the material—the complete demos which the composers used to secure the assignment. Including early and unused versions of the songs, the CD is a lasting treasury of this exceptional project.

Liner notes feature an essay on the film and score by Nick Redman and program notes by Al Kaplan incorporating new interview material with Rubinstein by Jeff Bond.

Including Dialogue from the Motion Picture