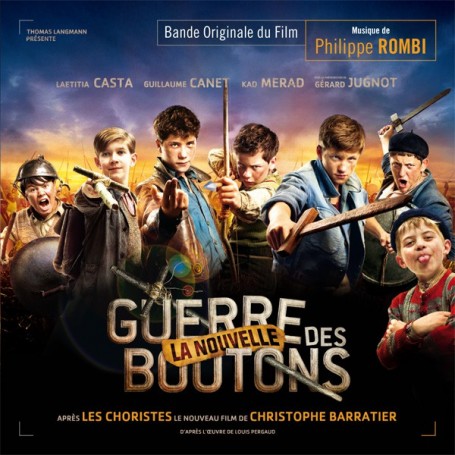 57 minutes of unreleased music performed by The Bel’Arte Symphony Orchestra and conducted by the composer.
8-page CD booklet including Christophe Barratier's statement (French and English translation).

March 1944. While the planet is shaken by World War Two, in a quiet corner of the French countryside, a war between kids is going on... The children from the neighboring villages of Longeverne and Velrans have been waging this merciless war as long as anyone can remember. But this time, their war will take an unexpected turn: the buttons of all the little prisoners' clothes are removed so that they head home almost naked, vanquished and humiliated. This conflict henceforth has a name: the "War of the Buttons." The village that collects the most buttons will be declared the winner. Meanwhile, Violette, a young Jewish girl, has caught the eye of Lebrac, the chief of the Longeverne kids.

Philippe Rombi composed a superb lyrical, epic and intimate score. Recorded at Studio Guillaume Tell with The Bel’Arte Symphony Orchestra under the baton of the composer himself and the Children's Chorus of Les P'tits Chanteurs de Bruy'Oll.
Music Box Records is proud to present the complete score on CD. Philippe Rombi supervised the album featuring 21 tracks with a total length of 57 minutes.

“This score is a classic journey that must be taken! It begins with a sense of wonder and progressively builds to a wondrous heart warming conclusion with the final five cues simply glorious! Rombi, long recognized for his lyricism, provides three wonderful themes, which he entwines and interplays with a skill many composers can only envy.” (Craig Lysy, Movie Music UK)

“It is a superb score. Rombi has created a soundtrack that literally ticks all the boxes. It is intimate, highly emotional, romantic but also boisterous, comedic and exciting. Overall this is a wonderful score to have in one’s collection and is a gem of a soundtrack from a composer who will return again and again to entertain us with more delights and enthral us with his mesmerizing music.” (Movie Music International)