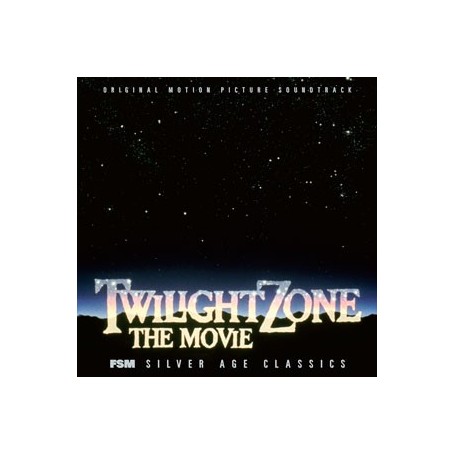 No composer was better suited to score the big-screen Twilight Zone adaptation than Jerry Goldsmith. By the early 1980s Goldsmith was a master in every genre of film, from intimate dramas to large-scale adventures, but he was particularly noted for his landmark scores for science fiction: Planet of the Apes, Star Trek: The Motion Picture, Alien and more—including Poltergeist (1982), for Twilight Zone: The Movie producer and co-director Steven Spielberg, and the original Twilight Zone series, for which Goldsmith scored classic episodes like “The Invaders.”

With massive technical ability at his disposal, and an unerring gift for drama and melody, Goldsmith wrote brilliant accompaniment for the four segments of Twilight Zone: The Movie, blending the intimate and epic, traditional and modern:

“Time Out,” directed by John Landis and starring Vic Morrow as a bigot facing just desserts, features an astringent, percussive score not unlike Goldsmith’s efforts from the original Twilight Zone TV series.

“Kick the Can,” directed by Steven Spielberg, features a magical, emotional score brimming with warmth as the residents of a retirement home discover an unlikely Fountain of Youth.

Finally, “Nightmare at 20,000 Feet,” directed by George Miller and starring John Lithgow as a terrified airline passenger who sees a monster on the wing, features brilliant psychological scoring with devilish moments (foreshadowing Goldsmith’s approach for Gremlins) and symphonic size.

Twilight Zone: The Movie was released on LP at the time of the film, a program since issued on CD in Japan and Germany. For the first time, FSM presents the complete, chronological score, with bonus tracks of the film’s songs (“Nights Are Forever,” by Goldsmith as featured on the LP, and “Anathesia” by Joseph Williams, previously unreleased) plus album edits of relevant cues. (The CD is carefully designed so that the LP sequence can be programmed if so desired.)

The complete score has been newly restored from the first-generation masters by Mike Matessino in cooperation with Bruce Botnick, Goldsmith’s longtime recording engineer and colleague who has mastered this CD. Matessino and Jeff Bond provide the authoritative liner notes.