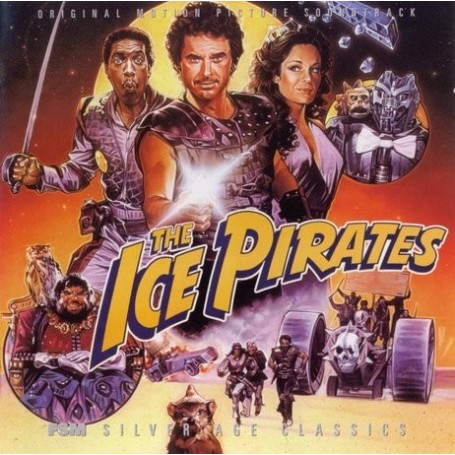 M-G-M’s The Ice Pirates (1984) was a sci-fi film best understood as falling between Star Wars and Spaceballs—on the budget of Battle Beyond the Stars. Science fiction adventures flourished in the years following George Lucas’s 1977 Star Wars and The Ice Pirates starred Robert Urich as the captain of a group of quirky space pirates whose quest for water (the galaxy’s scarcest commodity) entwinces them in a cosmic love story; Mary Crosby, Michael D. Roberts, Anjelica Huston, Ron Perlman, John Matuszak, John Carradine and Bruce Vilanch are among the costars. Unlike most of the straight-laced Star Wars knock-offs, The Ice Pirates consciously winked at its influences, with humorous takes on Alien (a “space herpe”), time travel and castration-by-assembly line.

Composer Bruce Broughton—one year before exploding on the feature scene with Young Sherlock Holmes and Silverado—did his best to capture The Ice Pirates’ wild shifts in tone with a blend of Korngoldesque fanfares, exciting action music (primarily for brass and woodwinds), driving ‘80s pop/rock percussion and keyboards, and a haunting, electronic love theme. The film benefited from a strong thematic approach and Broughton’s consummate skill—the main theme is darn catchy. Faced with limited resources, Broughton devised an orchestra that consisted primarily of brass, winds and pop/rock rhythm section in order to give the music as much heft as possible, while capturing the film’s wild shifts in tone from adventure to comedy. Children of the 1980s, your Ice Pirates ship has come in—and fans of Broughton and sci-fi should pay attention as well.

This premiere release of The Ice Pirates has been produced by Douglass Fake of Intrada from the composer’s personal elements (as the studio masters have long-since vanished). The complete chronological score is presented in stereo sound. Comprehensive liner notes by Alexander Kaplan include new comments by Bruce Broughton.